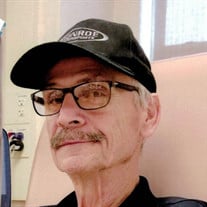 Melvin Wilson "Chip" Smith, Jr., 67 years, a lifelong resident of Monroe, Michigan went home to be with the Lord on Tuesday, February 12, 2019 in his home surrounded by family. Born September 20, 1951 in Monroe, Chip was the son of the late Melvin Wilson and Lelia Rose (D'Alessandri) Smith, Sr. He attended both St. Joseph and St. Michael The Archangel Grade Schools and was a 1969 graduate of Monroe High School. He was baptized and confirmed at St. Joseph Church. On April 1, 1972 Chip married his beloved wife, the former Patricia Lee Collum at St. Paul's United Methodist Church in Monroe. Chip was employed as a Maintenance Supervisor at Ford Motor Company in Monroe where he worked from 1972 until his retirement in February of 2009. After retirement he went back to work at Kirchhoff Automotive Company in Tecumseh, where he worked for the past six years. Chip was a member of St. Joseph Catholic Church and is now a member of St. John The Baptist Catholic Church. He was also a member of UAW Local 723. He enjoyed playing softball for the UAW team and coached CYO basketball, where he was named coach of the year. He enjoyed golfing, hunting, and spending time at the family cabin in Northern Michigan. Chip will be remembered as a great boss to the employees at Ford and a kind and courageous man who was the anchor to his family. Most of all Chip enjoyed time spent with and cooking for family, especially his grandchildren. Chip is survived by the love of his life; Patricia, two loving children; Kathryn S. (Kurt) Hedrick of Monroe and Denise D. Branham of Flat Rock, nine cherished grandchildren; Amber, Amie, Cody, Haily, Feliscity, Madison, Mary Jane, Daniel, and Daisy, three cherished great grandchildren; Mitchell, Easton, and Phoebe and a sister: Jackie (Dan) Tucker of Lakeland, FL. In addition to his parents Chip was preceded in death by his daughter; Nichole, a brother; Richard and a sister; Carol Garrett. Visitation will be held on Friday from 3-8 PM in the Bacarella Funeral Home, 1201 S. Telegraph Rd., Monroe, MI, 48161, where funeral services celebrating his life will be held on Saturday, February 16, 2019 at 11:00 AM. Long time family friend, Fr. Raymond Lewandowski, will officiate. Interment will follow at St. Joseph Cemetery in Monroe. Memorial contributions are suggested to Gabby's Ladder in Monroe.

Melvin Wilson "Chip" Smith, Jr., 67 years, a lifelong resident of Monroe, Michigan went home to be with the Lord on Tuesday, February 12, 2019 in his home surrounded by family. Born September 20, 1951 in Monroe, Chip was the son of... View Obituary & Service Information

The family of Melvin Wilson "Chip" Smith, Jr. created this Life Tributes page to make it easy to share your memories.