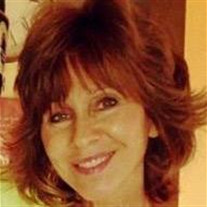 Mary Sue Terrasi, age 62 of Monroe, went to be with her heavenly Father Thursday morning in her home. She had been bravely battling cancer for the past four years. Family and friends may visit from 3 p.m. to 7 p.m. Sunday and 1 p.m. to 8 p.m. Monday at Bacarella Funeral Home. The Rosary will be recited at 6:30 p.m. Monday evening. She will lie in state at 10 a.m. Tuesday at St. Michael Catholic Church. Mass of the Resurrection will be celebrated at 11 a.m. by the church pastor, Rev. Fr. Philip Ching. Following the funeral Mass, Mary Sue will be laid to rest at St. Joseph Cemetery near her son, Gregory James, who died in January of this year. Born on August 20, 1956 in Wyandotte, MI, Mary Sue was the daughter of Edward and Patricia (Schulte) Cook. She was a 1974 graduate of St. Mary Academy and was a Licensed Practical Nurse at the Lutheran Home for several years. She married William Terrasi on October 17, 1986 at St. Patrick Catholic Church in Carleton. Mary Sue had an unwavering faith in God and was always serving others. She devoted herself to several prayer groups and organizations. After her nursing career, she volunteered for adult day care through Frenchtown Senior Citizens and home care programs. As an Extraordinary Minister of the Eucharist at St. Michael Church, she brought Holy Communion to many in-home individuals and nursing home residents. Mary Sue also volunteered for Heartbeat of Monroe and was a Right to Life activist against abortion. Mary Sue was multi-talented and enjoyed a variety of hobbies. She was creative with a keen eye for design both in and outside of the home. As a seamstress, she proudly made many homemade decorations herself. She enjoyed flower gardening, landscaping, cooking— for which she was very well known— sewing, crocheting and playing her music. She was gifted with a beautiful voice that she shared at church, in her community, and especially with her daughters. She also enjoyed power walking at an inhuman pace. She cherished her role as a grandmother, especially when at their lake house. She also enjoyed being a God-mother as well as a charitable sponsor to third world children. Mary Sue is survived by her husband, Bill Terrasi of Monroe; three children, Rebecca (Lev) Gartman of New Jersey, Amy Terrasi of Monroe, and Elizabeth (Gabriel) Giarmo of Carleton; her parents, Ed and Pat Cook of Carleton; six siblings, Joseph (Rebecca) Cook of Grass Lake, MI, Anthony (Helena) Cook of Arizona, Christopher (Patricia) Cook of Ida, Catherine (Michael) Garner of Missouri, Barbara (Brian) Stein of Carleton, and Theresa (Bart) Fisher of Indiana; three grandchildren, Jacob James, Jordan James, and Sophia Giarmo. Mary Sue and Bill are also expecting two new grandchildren in the next two months. Memorial donations are suggested to Unbound Ministry (www.unbound.org) a non-profit organization that supports families and children in third world countries, Right to Life of Michigan, or to the family for a foundation that will be established pursuant to Mary Sue's Christian acts of charity. Online condolences and special memories may be shared with the family by visiting the obituary page at www.bacarellafuneralhome.com.

Mary Sue Terrasi, age 62 of Monroe, went to be with her heavenly Father Thursday morning in her home. She had been bravely battling cancer for the past four years. Family and friends may visit from 3 p.m. to 7 p.m. Sunday and 1 p.m. to... View Obituary & Service Information

The family of Mary Sue Terrasi created this Life Tributes page to make it easy to share your memories.

Mary Sue Terrasi, age 62 of Monroe, went to be with her heavenly...

Send flowers to the Terrasi family.