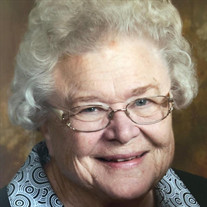 Mary Kathryn Carpenter, age 81 of Monroe, passed away Sunday, May 30, 2021, at Immaculate Heart of Mary (IHM) Senior Living Community in Monroe, Michigan. Mary was born 1939 in Elyria, Ohio, the daughter of Joseph Henry and Florence (Smith) Sampson. She was educated in Elyria, graduating from Elyria High School. She then attended Bowling Green State University, where she received her Bachelor of Arts degree. She earned her Master of Science in Library Science from the University of Michigan at Ann Arbor. Mary began her career working as a Librarian for the Detroit Public Library. On July 27, 1963, Mary was united in marriage to John Willard (Bill) Carpenter, Jr. of Grosse Pointe, Michigan. They married at St. Gertrude Catholic Church in St. Clair Shores, Michigan, and subsequently lived in the community for 13 years. After moving to St. Clair Shores with her husband, Mary then served as Librarian at Lake Shore High School. In 1976, the family moved to Monroe, Michigan. While living in Monroe, Mary served as a Librarian for the Monroe County Library System and Monroe Catholic Central High School. In 1986, Mary and Bill moved to the Cleveland area where she continued her career at Lorain County Community College and St. Edward Catholic High School. In her retirement years, Mary continued to be active in her community and served on boards, especially with St. Ladislas Catholic Church in Westlake, Ohio, the Avon Senior Center, and the Avenbury community in Avon, Ohio. Mary’s passion included spending time with friends and family, quilting and needlework, gardening, travel and being active in the activities of her children and grandchildren. After her husband passed away in Fall 2019, Mary moved back to live in Monroe, Michigan, near her daughter. She lived at the Alice Lorraine Care Center (ALCC). The family would like to thank the dedicated caregivers that were involved in her care during the last year and a half of her life at ALCC, recent rehab stay at Wellsprings, and rehab/end-of life care at IHM. The family also gives special thanks to the Promedica Hospice staff for their care and grace. She is survived by her children, Anne Marie (Jeffrey) Spaulding and John Willard (Bill) (Maria Cronley) Carpenter, III; grandchildren: Monica (Mr. Alexis Piraina) Naida, Mark (Haley) Naida, and Brent Spaulding. Mary is proceeded in death by her devoted husband of 56 years and her parents. Mass of Christian Burial will be held Monday, June 7, 2021, at St. Mary Catholic Church, 127 North Monroe Street, Monroe at 11:00 am with Father David Burgard officiating. Family and friends are invited to gather at 10:00 am before the service at the church. Private family burial will be in St. Joseph Catholic Cemetery. In lieu of flowers, donations can be made to Mary K. Carpenter Scholarship Fund at St. Mary Catholic Central High School, 108 W. Elm Avenue, Monroe, MI 48162.

The family of Mary Kathryn Carpenter created this Life Tributes page to make it easy to share your memories.

Send flowers to the Carpenter family.