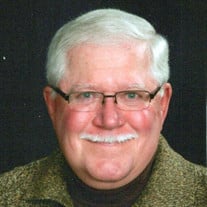 Marvin Arnold Krueger, 73 was born on April 14, 1947, to Ruth (Hoffman) and Arnold Henry Krueger of Monroe, Michigan. He passed away on Wednesday morning, September 2nd, 2020, while in the tender care of Ebeid Hospice in Sylvania, Ohio due to complications of pancreatic cancer. Marvin was a 1964 graduate of Monroe High School. He lived in Jackson, Michigan while attending the pilot campus of Michigan State. Marvin came home for a year to earn more money to attend Michigan State University the following year. While he worked for Dr. Colby, he attended Monroe Community College where he met his future wife, Miss Judy Thurman-Langton. Marvin was drafted During the Vietnam Conflict. Marvin proudly served his country in the U.S. Army as an MP and made Sargent. After two years of honorable service, he returned home just in time for Christmas of 1970. Two Years later Marvin and Judith married at St. John The Baptist Catholic Church. This June on the 24th they celebrated their 48th anniversary. Marvin had a long and diverse working career, a man of many talents. Upon his return from the army, he went to work for General Telephone. Throughout his career in communications, he worked on residential installations and the installation of business systems including lottery and banking systems. He retired in 1997…a 33-year career. He then went to work for Monroe Bank and Trust as their Communication Technician handling installations and maintenance for 9 years. Marvin often worked a second job in various capacities over the years. He was one of the first Emergency Medical Technician that had earned his license from the state of Michigan before it was required … active for 5 years. Marvin was an active member of the Monroe County Sherriff Horse Posse and worked for the Erie Township Police department. Much could be said about Marvin as a person. He was an avid outdoorsman. Although he had a love for hunting small game. He truly loved hunting for deer and turkey, but his true passion was duck hunting. He also enjoyed the challenges with traditional archery and crafted his own longbows…a traditional bowyer. He enjoyed working in his orchard and garden. His small farm contained at one time almost 250+ various breeds of chickens, ducks, geese, and turkeys. He loved working his bees and at one time he had 13 hives. In Marvin's younger days, he loved to bowl and play softball. He was a softball umpire for over 35 years and a former Custer Baseball Coach. He will be remembered as a caring, charitable, loyal; giving, and kind gentlemen. Marvin was a member of St. Mary Catholic Church, its Ushers Club, and God's Works volunteer; member and Past Grand Knight of Monroe Council 1266 Knights of Columbus and its charitable Goodfellows organization, 4th Degree Raisin River General Assembly 0488 and it's Color Corp; Canvas Back Gun Club; Ducks Unlimited; 4-H; Future Farmers of America; Monroe County Officials Associations; Michigan High School Athletic Association; and a former member of the American Legion. Marvin is survived by his wife, Judy; two sons, William Krueger and his wife Debra, Rusty (Russell) Krueger; his mother, Ruth Krueger; a brother, Edward Krueger; three grandchildren, Megan, Stephanie, and Autumn Krueger; and great-granddaughter, Saylor Krueger; 4 nieces Jennifer Books, Whitney Dixon, Tara Langton, and Amanda Sroka, and 2 great-nieces, Lily Books and Fiona Sroka. 2 nephews: Justin Krueger and William Langton (His God Child), as well as 5 great-nephews: Cory and Trent Books, and Hunter, Colt, and Wesson Dixon. Marvin was preceded in death by his father, Arnold Krueger. Family and friends may visit from 2 p.m. to 8 p.m. Tuesday at Bacarella Funeral Home. All visitors are reminded to please follow facial covering protocol. At 7 p.m. the Knights of Columbus will lead a Rosary/Litany prayer service followed by a Chalice Presentation by Raisin River General Assembly. Marvin will lie in state at 10 a.m. Wednesday at St. Mary Church where Mass of the Resurrection will be celebrated at 11:00 a.m. by the Church Pastor, Rev. Fr. David Burgard. Burial will follow at LaSalle Twp. Cemetery with military honors provided by VFW Post 1138, Monroe. For anyone wanting to make a memorial donation, the family suggests supporting the Knights of Columbus Goodfellow program (P.O. Box 544, Monroe 48161).

Marvin Arnold Krueger, 73 was born on April 14, 1947, to Ruth (Hoffman) and Arnold Henry Krueger of Monroe, Michigan. He passed away on Wednesday morning, September 2nd, 2020, while in the tender care of Ebeid Hospice in Sylvania, Ohio due... View Obituary & Service Information

The family of Marvin Arnold Krueger created this Life Tributes page to make it easy to share your memories.

Send flowers to the Krueger family.