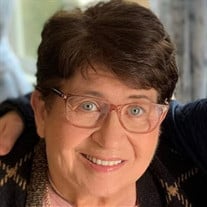 Maria Deluca, age 72 of Monroe, passed away at 2:58 p.m. Wednesday at University of Michigan Medical Center, Ann Arbor after a courageous battle with cancer. Born on August 16, 1948 in Borgetto, Sicily, Maria was the daughter of the late Giuseppe and Maddalena (Occhipinti) Piccione. She married the love of her life Gaspard Deluca on July 16, 1970 in Borgetto and came to the United States in 1974. Together with her husband, Maria co-owned and operated Franco’s Pizzeria in Blissfield for many years before retiring in 2000. She loved cooking and making dinners for homeless shelters. You could never visit without her asking if you were hungry. She didn't take no for an answer. She loved nothing more to spend time with her family especially her grandchildren. She was a devout Catholic and member of St. Michael Catholic Church. She was also a loving wife, mother and Nonna. Maria is survived by her husband; three children: Antoinette (Mike) Carder of Monroe, Carl (Zach) Deluca of San Diego, California, and Valerie (Jose) Casanova of Monroe; two siblings, Francesco (Giuseppa) Piccione and Pina Giarmo, both of Monroe; Seven grandchildren: Jordan, Jacob, Nathaniel, Natalia, Carly, Daniella, and Matteo; many nieces and nephew. In addition to her parents, Maria was also preceded in death by a granddaughter, Katarina and a brother-in-law, Rosario Giarmo. Family and friends may visit from 2 p.m. to 7 p.m. Sunday at Bacarella Funeral Home where the Rosary will be recited at 5 p.m. Maria will lie in state at 10 a.m. Monday at St. Michael Catholic Church. Mass of the Resurrection will be celebrated at 11 a.m. by the church pastor, Rev. Fr. Kishore Babu Battu. Due to cemetery attendance limitations, interment will be privately attended by family only at St. Joseph Cemetery.

Maria Deluca, age 72 of Monroe, passed away at 2:58 p.m. Wednesday at University of Michigan Medical Center, Ann Arbor after a courageous battle with cancer. Born on August 16, 1948 in Borgetto, Sicily, Maria was the daughter of the... View Obituary & Service Information

The family of Maria Deluca created this Life Tributes page to make it easy to share your memories.

Send flowers to the Deluca family.