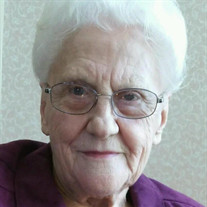 Lorraine Roba Monday, 92 of Monroe, went home to be with the Lord at 9:50 p.m. Saturday, April 27, 2019, at Fountainview of Monroe. Born October 14, 1926 in Monroe, she was the daughter of the late Laude and Matilda (Smith) Braden. When Lorraine was just an infant, her parents decided to move back to Tennessee, finally settling in Speedwell, where she attended Powell Valley High School, graduating with the class of 1944. Loraine married her beloved husband, Rollin D. Monday, on March 18, 1950 in Campbell County, Tennessee. Sadly, he preceded her in death on December 14, 2002. Soon after they were married, the two moved to Monroe where they began raising their family. On Lorraine’s 26th birthday, she began her career with Mercy Memorial Hospital as an Accounting Supervisor, after thirty-eight years she retired on March 1, 1990. Lorraine was a longtime member of Stewart Road Church of God where she was a Sunday School Teacher for many years and participated in their Widows Group. She also made cakes for the church’s funeral luncheons. Lorraine enjoyed cooking, spending time with her family, especially the men in her life, and attending her grandchildren’s sporting events. She cherished her memories from a trip she and her late husband took to the Holy Land where Rollin was saved and baptized in the Jordan River. To cherish her memory, Lorraine leaves one son, Roger (Dawn) Monday of Carleton; a daughter-in-law, Patricia Monday of Monroe; a sister, Jimmie Edwards of Speedwell, Tennessee; six grandchildren; and nine great-grandchildren, with one more on the way. In addition to her parents and husband, Lorraine was preceded in death by one son, Kenneth Monday; a brother, Eugene Braden; a sister, Pauline Owens; and two brothers-in- law, Matthew “Buck” Edwards and Marshall “Goldie” Owens. Visitation will be held from 2 p.m. until 8 p.m. Thursday, May 2, 2019, at Bacarella Funeral Home, 1201 S. Telegraph Road, Monroe, MI, 48162. She will lie in state at Stewart Road Church of God at 10 a.m. on Friday, May 3, 2019, where services celebrating her life will begin at 11 a.m. Rev. Keith Hawes, Pastor of the church, will officiate. Interment will follow at Roselawn Memorial Park, LaSalle. Memorial contributions in Lorraine’s memory are suggested to Stewart Road Church of God or an organization of the donor’s choice.

Lorraine Roba Monday, 92 of Monroe, went home to be with the Lord at 9:50 p.m. Saturday, April 27, 2019, at Fountainview of Monroe. Born October 14, 1926 in Monroe, she was the daughter of the late Laude and Matilda (Smith) Braden. When... View Obituary & Service Information

The family of Lorraine Roba Monday created this Life Tributes page to make it easy to share your memories.

Lorraine Roba Monday, 92 of Monroe, went home to be with the...