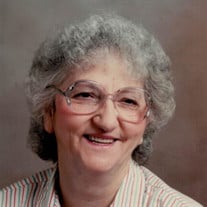 Linda J. Hyden, 86 years, of Monroe, MI went home to be with the Lord at 7:43 PM on Friday, December 28, 2018, at Fountain View of Monroe with loved ones by her side. Born February 3, 1932 in Claiborne County, Tennessee, she was the daughter of the late James Marshall and Ellen (Hopper) Braden. Linda moved to Monroe in 1952 from Speedwell, Tennessee. She married her beloved husband, James V. Hyden, May 12, 1962, in Monroe. He preceded her in death on February 27, 2012. Linda worked as a parts packer for Howard Ternes for fourteen years, and prior to that, waitressed at the Triangle restaurant for four years. Linda was a dedicated member of Monroe Primitive Baptist Church for more than forty years, became a member of the church in 1975, and served as Treasurer for seventeen of those years. Sundays with Mom were extra special. After church, she would often take her young daughters shopping, to see a movie, or Ponderosa for lunch. Each summer, she loved traveling to Tennessee visiting house to house to see her sisters and family members, and spend time in the Smoky Mountains. Most of all, Linda was very proud of her family and especially loved get-togethers during the holidays. She was a very devoted and loving mother. Any chance to spend time with her family was important to her. In addition to her sweet smile and warm hugs, she made the most amazing homemade biscuits and gravy, zucchini bread, and chocolate pies. She will be dearly missed and forever in our hearts. To cherish her memory, Linda leaves four daughters: Sheila Gross, Terri Messer, Rhonda (Chuck) Grimm, and Tracie (Scott) Leach; eight grandchildren: Daniel (Aleisha) Messer, Melanie Barnes, Matthew Leach, Nathaniel Leach, Russell Grimm, Jessica Gross, Leana (Ronnie) Miller, and Lindsey Messer; seven great-grandchildren: Hayden, Maddison, Raelyn, Lydia, Willow, Holly, and Jade; and two sisters, Martha Breeding of Maynardville, Tennessee, and Mary Lee Maddox of LaFollette, Tennessee. In addition to her parents, she was preceded in death by two sisters, Carrie Brantley and Gladys Terry; and four brothers: Henry Braden and three in infancy. Visitation will be held from 1 PM until 7 PM Sunday, January 6, 2019, at Bacarella Funeral Home, 1201 South Telegraph Road, Monroe, MI, 48161. Services celebrating her life will begin at 11 AM Monday, January 7, 2019, also at Bacarella Funeral Home. Rev. Randy Pitney, Pastor of Monroe Primitive Baptist Church, will officiate. Interment will follow at Roselawn Memorial Park. Memorial contributions in Linda’s memory are suggested to Monroe Primitive Baptist Church.

Linda J. Hyden, 86 years, of Monroe, MI went home to be with the Lord at 7:43 PM on Friday, December 28, 2018, at Fountain View of Monroe with loved ones by her side. Born February 3, 1932 in Claiborne County, Tennessee, she was the daughter... View Obituary & Service Information

The family of Linda J. Hyden created this Life Tributes page to make it easy to share your memories.

Send flowers to the Hyden family.