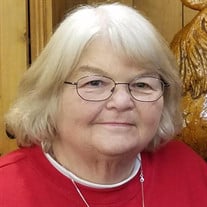 Linda Marie (Scheich) Beeler, 67, died unexpectedly September 18, 2020, at St. Joseph Hospital in Ann Arbor, Michigan, after a short illness. Born September 22, 1952, in Monroe, Michigan, she was the daughter of Gerald and Marian (Henderson) Scheich. Linda lived her entire life in Monroe County. She graduated as the Valedictorian from Mason High School in 1970 and attended the University of Michigan. On September 6, 1975, she married Gary Beeler. They had 2 daughters and were together until his death in 2007. They were married for 32 years. Linda worked as an accountant for many local businesses, including Consolidated Packaging, Independent Dairy, SE Plumbing, Villa Party Store, Miller’s Heating & Cooling, Clark & Associates, Tiffany’s Pizza, and most recently, Mary Sacco’s Pizza in Monroe. In the past, she had worked with youth clubs for the First Presbyterian Church and after school activities for Monroe Public Schools. Linda was always willing to help anyone who needed it and frequently shared homecooked meals with neighbors. Linda loved to travel, especially to her property “up north”. She also loved the Smoky Mountains, and to visit family in Wisconsin and her in-laws in Tennessee. Most of all, she loved spending time with her daughters: going to concerts, NASCAR races, movies, or just shopping and eating. Linda is survived by her daughters, Jennifer and Jamie Beeler of Monroe; sister, Laurie Scheich of Roseville, Minnesota; brother, Larry (Julie) Scheich of Green Bay, Wisconsin; aunt, Janet Henderson of Monroe; sister-in-law, Celia Beeler, nephew, Tony (Colleen) Posa, great-nieces Brittany (Corey) Banks and Caitlin (Jason) Reynolds, all of Sweetwater, Tennessee. She was preceded in death by her parents, husband Gary, her aunt, Peggy Welch, her beloved dog, Psycho, and numerous aunts and uncles. Due to the Covid19 Pandemic, visitation and funeral services will be private. Linda will be interred next to her husband at Roselawn Memorial Park, which will also be private. A memorial service will be held at a later date. Memorial contributions are suggested to Victory Junction Gang Camp. Bacarella Funeral Home, 1201 S. Telegraph Rd., Monroe, Michigan is assisting Linda’s family with funeral arrangements.

The family of Linda M. Beeler created this Life Tributes page to make it easy to share your memories.

Send flowers to the Beeler family.