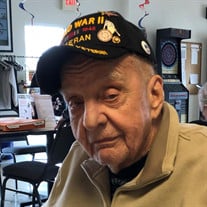 Lee R. “Curley” Stahl, age 96 of Monroe, passed away Wednesday, October 13, 2021 in his home. Born July 11, 1925 in Alvordton, OH, Curley was the son of the late Roy and Doris (DeGroff) Stahl. Anxious to serve his country, Curley enlisted in the U.S. Navy at the age of 17 on March 11, 1943 with the permission of his parents. He received his high school diploma while in basic training and was honorably discharged on February 18, 1946. During WWII, Curley served aboard the DE-31 USS Sederstrom, as an Antiaircraft Gunner. His ship came under enemy attack on several occasions including many kamikaze attempts. He was awarded the Asiatic Pacific Theater Ribbon with 5 Stars. In recent years, Curley was honored when he was selected by the Honor Flight Program in 2011 and was flown to Washington, D.C. to visit the WWII War Memorial and the Nation’s Capitol. In 2014, he served as Grand Marshall of the Memorial Day Parade. Curley was very proud to have served his country in the U.S. Navy. He enjoyed the comradery of his fellow vets as a life member of VFW Post 1138 where he liked to have a “Bud” with his buds. After the war, Curley moved to Monroe in 1949 and began a career as a truck driver for Monroe Cooperative Oil (Marathon Oil) in the 1950’s and 60’s. He also worked construction for many years, retiring in the early 1990’s. Curley was a Detroit Tigers Baseball fan and attended many opening day games. He coached Little League baseball and adult league baseball in Monroe from the 1960’s thru the 1980’s and also enjoyed bowling and playing Euchre. Curley is survived by 11 children: Mike (Mary Jane) Stahl of Philadelphia, PA, Larry Stahl of Monroe, Penny (Bill) Weller of Hillsdale, MI, Mike Carr of Monroe, Theresa (Ben) Abalos of Monroe, Joe (Jessie) Carr of Carleton, Tim (Diane) Carr of LaSalle, Deedee (Troy) Trent of Monroe, Doug (Theresa) Staelgraeve of Trenton, MI, Kellie (Tim) Begley of Monroe, and Kassie (Rick) Nipper of Monroe; 19 grandchildren, 27 great-grandchildren and several great-great-grandchildren. In addition to his parents, Curley is also preceded in death by a daughter, Debbie Mackey; siblings Oliver “Bodi” Stahl, Beryldine Stahl, Geraldine “Jeri” Brand, Eugenia “Gene” Gallant, and Kathryn “Katie” Young; spouse, Catherine “Kitty” Carr; grandson, Brian Carr; and daughter-in-law, Norma Stahl. A special thank you goes to Curley’s youngest grandson, Kai Nipper, for the many years he has taken care of him and been by his side. Family and friends may visit from 3 p.m. to 8 p.m. Monday and 11 a.m. till time of funeral 1 p.m. Tuesday at Bacarella Funeral Home. Rev. B.J. McDaniel of One Way Christian Fellowship Church will officiate followed by burial at Roselawn Memorial Park where his comrades of VFW Post 1138 will offer military honors. To honor Curley, the family suggests memorial donations be made to VFW Post 1138.

The family of Lee R. "Curley" Stahl created this Life Tributes page to make it easy to share your memories.

Send flowers to the Stahl family.