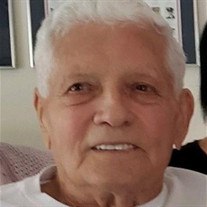 Lawrence D. Moran, age 87 of Monroe, passed away at 7:45 a.m. Friday, January 24, 2020 at Ebeid Hospice in Sylvania, Ohio. Born August 15, 1932 in Toledo, Ohio, Larry was the son of the late Steve and Margaret (Edelhauser) Moran. He graduated from Monroe High School in 1951 and enlisted in the U.S. Navy. Larry served from July 31, 1951 until being honorably discharged on July 22, 1955. He served aboard the U.S.S. Dyess during the Korean Conflict and earned the National Defense Service Medal and the Navy Occupation of Europe Service Medal. On September 19, 1986, Larry married Sandra Collins in Temperance. Sadly, Sandra preceded Larry in death on June 22, 2004. He later married Carol Seibt on May 26, 2007 at Trinity Lutheran Church. As a Mill Operator, Larry was employed by Dundee Cement for 35 years. He was a kind and caring man who sometimes worked two jobs to provide for his family. Larry was extremely proud of his service to his country. He continued to honor veterans for over 40 years by serving on the VFW Post 1138 Ritual Team. He was a sociable person (who never met a stranger) with an occasional hint of mischief in his eye. Larry was a life member of VFW Post 1138, American Legion Post 40, and Amvets Post 1942. Additionally, he was a member of St. Michael Catholic Church where he served as an usher for more than 60 years, Moose Lodge 884, Monroe Council 1266 Knights of Columbus, and 40 et 8 Voiture 1153. Larry is survived by his wife Carol; daughter, Cheryl Moran; son, Dan (Julie) Moran; two grandchildren, Phillip Moran and Nicole Cardwell; two great-grandchildren, Akira Cardwell and Gabriel Gonzales; step-daughter, Tonya Rodgers LaBeau, step-son, John Collins, sister-in-law, Marilyn Moran; several nieces and nephews; and his two canine companions, Rudy and Rusty. In addition to his parents and wife Sandy, Larry was also preceded in death by a daughter, Beth Ann Schultze; four brothers, Steve, Joe George and Robert Moran; and four grandchildren, Timothy Ellers, Timothy Guy, Tammy Guy, and Jami Daly. Family and friends may visit from 2 p.m. to 8 p.m. Tuesday at Bacarella Funeral Home. Larry will lie in state at 9 a.m. Wednesday at St. Michael Catholic Church. Mass of the Resurrection will be celebrated at 10 a.m. by the church pastor, Rev. Fr. Philip Ching. Burial will follow at Roselawn Memorial Park in LaSalle with military honors provided by his friends and comrades of VFW Post 1138. For anyone wanting to make a memorial donation in Larry’s memory, his family suggests the VFW Post 1138 Ritual Team or the Monroe Animal Shelter.

The family of Lawrence D. Moran created this Life Tributes page to make it easy to share your memories.

Send flowers to the Moran family.