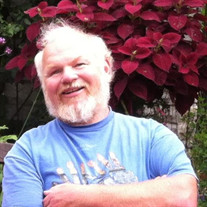 Lawrence J. “Larry” Lambrix Junior, age 64, of Newport, went home to be with the Lord on Saturday, December 21, 2019, at his home. Born September 13, 1955 in Erie, Pennsylvania, moving to Monroe with his family in 1959. He was the son of the late Lawrence J. and Phyllis (Kramer) Lambrix Senior. Larry attended Catholic Central High School, graduating with the class of 1973. He met his wife, Nancy K. Dingledine, while taking French at Monroe Community College. The two became close while studying together and were married on May 18, 1985 at Trinity Lutheran Church, Monroe. Larry worked as a Heavy Truck Mechanic for Belle Tire and NTB, retiring in 2016. Prior to being a mechanic, Larry worked for Hollister Drywall for ten years and after his retirement, worked for Manheim Auto Auction as a transporter. Larry loved working on cars, motorcycles and small engines and could “wrench” on anything. He enjoyed traveling with Nancy, making trips touring lighthouses all over the state, spending time “up north” in Oscota and visiting family in Florida. To cherish his memory, Larry leaves his beloved wife of thirty-five years, Nancy; one daughter, Tracy McKinney of Lansing, Michigan; six siblings: Terry (Linda) Lambrix of Morley, Gail (Roger) Justice, Mike (Netty) Lambrix, Sue (Norm) Chapman, Kevin (Keith) Lambrix and Gary (Brenda) Lambrix; and one grandchild, Penelope McKinney. In addition to his parents, Larry was preceded in death by his Grandmother Lambrix and Grandmother Kramer. In accordance with his wishes cremation has already taken place and a memorial visitation will be held from 11 a.m. until services celebrating his life begin at 1 p.m. on Saturday, January 25, 2019, at Bacarella Funeral Home, 1201 South Telegraph Road, Monroe, MI, 48161. Rev. Mark T. Kipfmiller, Pastor of St. Mark’s Lutheran Church, Flat Rock, Michigan, will officiate. Memorial contributions in Larry’s memory are suggested to St. Mark’s Lutheran Church.

The family of Lawrence J. "Larry" Lambrix, Jr. created this Life Tributes page to make it easy to share your memories.