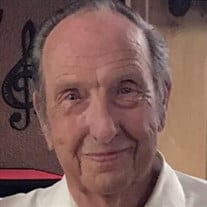 Larry T. “Ted” Hawkins, 85 years, of Monroe, Michigan went home to be with the Lord on Sunday, April 11, 2021. Born October 15, 1935, in Kildav, Kentucky, Ted was the son of the late William Earl and Molly Florence (Ayers) Hawkins. Ted moved to Monroe in 1951. On October 13, 1956, Ted married his beloved wife, the former Mildred J. Turner, in Monroe. Sadly, Mildred passed away on April 22, 2021. They had been married for 64 years. Ted was employed for 30 years at Ford Motor Company. He retired from the Rawsonville Plant in 1997. Ted was a former member of Bible Fellowship Church and First Wesleyan Church, and was currently a member of Frenchtown Missionary Baptist Church. He also worked at the churches, doing yard work and whatever else needed tending to. Ted enjoyed singing and playing the guitar. Both he and Mildred sang together as a couple ministering at various places. Ted also enjoyed shooting pool, going to flea markets, music and yard work. Most of all Ted enjoyed time spent with family. Ted is survived by three loving sons; Timothy M. Hawkins of Holland, OH, Daniel M. (Teresa) Hawkins and Joe L. (Dee) Hawkins, both of Monroe, nine cherished grandchildren, 13 treasured great grandchildren, two siblings; Jack (Bertha) Hawkins and Lois (Don) Keck both of Morristown, TN. In addition to Mildred’s passing, Ted was preceded in death by a son, Keith, a grandson, Ethan, four brothers; Lee, Snookie, Bob, and Junior and a sister, Dollie Harmon. Visitation for both Ted and Mildred will be held on Monday from 1-8 pm in the Bacarella Funeral Home, 1201 S. Telegraph Rd., Monroe, MI, 48161, where funeral services celebrating their life will be held on Tuesday, April 27, 2021 at 11:00 am. Interment will follow at Roselawn Memorial Park. Memorial contributions are suggested to a charity of the donor’s choice.

The family of Larry "Ted" Hawkins created this Life Tributes page to make it easy to share your memories.

Send flowers to the Hawkins family.