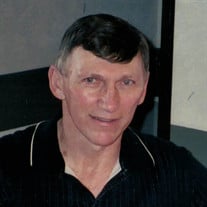 Kenneth W. Monday, 67 years, a lifelong resident of Monroe, Michigan went home to be with the Lord on Wednesday, March 20, 2019 in his home, after a brave battle with cancer, with his loving family at his side . Born March 23, 1951 in Monroe, Ken was the son of Rollin D. and Lorraine R. (Braden) Monday. He was a 1969 graduate of Monroe High School. Ken attended Monroe County Community College and earned his Bachelor's in Business Administration from Eastern Michigan University. On April 22, 1978 Ken married his beloved wife, the former Patricia A. Simpson, at Stewart Road Church of God in Monroe. Ken worked as a Mail Carrier for the United States Post Office until his retirement in 2008 Ken was a member of Stewart Road Church of God, where at one time he served as an usher, and played on the church's basketball and softball teams. He also played softball in various league's in Monroe. He spent many hours enjoying softball games at Munson Park. Ken enjoyed playing and watching sports, hunting, fishing, lifting weights, working out, and coaching girls softball. He coached the Custer Girls to a Fair Championship and helped his daughter Michelle coach JV softball at Monroe High School. Most of all Ken loved time spent with family, especially his grandchildren. Ken is survived by his beloved wife of 40 years; Patty, two loving daughters; Michelle L. (Tom) Collett of Monroe and Kendra D. Monday (Sean Goldman) of Livonia, MI, three cherished grandchildren; Macy, Avery, and Tanner Collett, his mother; Lorraine R. Monday of Monroe and his brother; Roger D. (Dawn) Monday of Carleton, MI. In addition to his father Ken was preceded in death by his grandparents. Visitation will be held on Sunday from 2-7 PM at the Bacarella Funeral Home, 1201 S. Telegraph Rd., Monroe, Michigan, 48161. On Monday, March 25, 2019 he will lie in state at Stewart Road Church of God from 10:00 am until funeral services celebrating his life at 11:00 am. The Rev. Keith Hawes, pastor of the church, will officiate. Interment will follow at Roselawn Memorial Park. Memorial contributions are suggested to the music and/or sports departments at Stewart Road Church of God. Online condolences and special memories may be shared with the family by visiting the obituary page at www.bacarellafuneralhome.com.

Kenneth W. Monday, 67 years, a lifelong resident of Monroe, Michigan went home to be with the Lord on Wednesday, March 20, 2019 in his home, after a brave battle with cancer, with his loving family at his side . Born March 23, 1951 in... View Obituary & Service Information

The family of Kenneth W. Monday created this Life Tributes page to make it easy to share your memories.