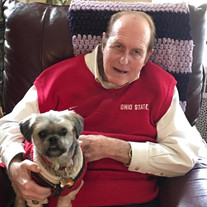 Kenneth J. Miller, age 75 of Monroe, passed away at 6:15 a.m. Friday, April 2, 2021 in his home due to complications from Parkinson’s Disease. Born on October 24, 1945 in England, Ken was the son of the late Kenneth R. and E. Lilian (Gould) Miller. He came to the U.S. as an infant and was raised in the Toledo area, graduating from Bedford High School in 1963. Ken served his country in the U.S. Navy as a Chopper Medic during the Vietnam War. Afterward, he attended Ohio State University where he earned a Bachelor Degree in Secondary Education, graduating Cum Laude in 1972. He played football for the OSU Buckeyes for three years and was a member of the 1970 Championship team. On July 1, 2017, Ken married Lana E. (Garner) Emerson at First Presbyterian Church of LaSalle. Ken worked in the insurance field for a few companies before starting his own business, Great Lakes Benefit’s in 1989, which he operated until just a couple years ago. Ken enjoyed volunteering in many capacities. He held local, regional and state positions with the Jaycees, served as Chairman of the Woodward Dream Cruise in Detroit, served as Monroe Chairman of the Citizen’s Planning Commission, and was instrumental in founding NAIFA/Charlie Sanders Scholarship Foundation in 2010 (now Insurance Foundation/Nick Rafko Scholarship Foundation). A proud Buckeye, Ken bled Ohio State sports. He was a sports fanatic and avid sports memorabilia collector and book collector. Ken was a life member of Monroe VFW Post 1138 and Monroe Council 1266 Knights of Columbus. Ken is survived by his wife Lana; three children, Kristina (Matthew) Nicholas, Kimberly Miller, and Kenneth Miller, Jr., all of Toledo; step-son, Kenneth (Lindsay) Emerson of Marysville, Ohio; brother, David (Sue) Miller of Franklin, Indiana; six grandchildren; and faithful companion, his pet dog, Cosmo. Family and friends may visit from 3 p.m. to 8 p.m. Tuesday at Bacarella Funeral Home where a Rosary/Litany Service will be rendered by the Knights of Columbus. Funeral services will be held at 1 p.m. Wednesday at the funeral home with Rev. Heather Deeb of First Presbyterian Church of LaSalle officiating. Burial will follow at Roselawn Memorial Park where military honors will be provided by Monroe VFW Post 1138. In lieu of flowers, memorial contributions are suggested to the family.

The family of Kenneth J. Miller created this Life Tributes page to make it easy to share your memories.

Send flowers to the Miller family.