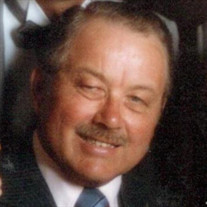 Karl Mathe, age 90 of Monroe, passed away at 1:10 p.m. Wednesday, October 14, 2020 at Fountain View of Monroe. He had been in declining health for three months. Born on January 31, 1930 in Andreasberg, Germany, Karl was the fifth child of the late Wenzel and Maria Mathe. He studied as a carpenter’s apprentice and immigrated to the United States in 1951 following World War II and joined the Michigan National Guard in 1952. In 1953, he was drafted into the U.S. Army during the Korean War and was stationed for 18 months in France during which time he received his U.S. Citizenship. He continued his service as a member of the Army Reserve and Michigan National Guard for nine years. In 1961, Karl was once more called to active duty during the Cuban Missile Crisis and was stationed at Fort Benning, Georgia for 11 months. On September 27, 1958, Karl married Carolyn A. Eppler of Erie, Michigan at St. Joseph Catholic Church in Erie. As a carpenter, Karl was employed by many general contractors and Monroe Carpenters Local 1301. Following retirement in 1990, he moved to his farm on S. Custer Road, continuing to work as a hobby carpenter on many projects. Karl was a member of St. Mary Catholic Church and its Usher’s Club, Veterans of Foreign Wars, the National Guard Competitive State Pistol Team, Monroe Council 1266 Knights of Columbus, Raisin River General Assembly 0488 where he served as Faithful Navigator and member of its Color Corps, National Rifle Association, Teutonia Maennerchor, Toledo Schwaben Verein, and the German-American Club where Karl was active for many years at the annual German-American Festival in Oregon, OH. In addition to carpentry and target shooting, Karl also enjoyed hunting, fishing, gardening, teaching Hunter Safety courses for 30 years, and visiting his property “Up North” in Lake City, MI. Karl is survived by his wife of 62 years, Carolyn Mathe; two sons, John (Susan) Mathe of LaSalle and Gustave Mathe of Monroe; two grandsons, Mark (Sarah) Mathe of Ida and Brian (Jessica) Mathe of Minnetonka, MN; two great-grandchildren, Lauren and Wesley Mathe of Ida; and sister, Lore Mathe of Passau, Germany. In addition to his parents, Karl was also preceded in death by siblings Johann Mathe, Anna Petschl, Maria Mathe, and Wenzel Mathe. Family and friends may visit from 3 p.m. to 7 p.m. Sunday, Oct. 18th at Bacarella Funeral Home. Monroe Council 1266 Knights of Columbus will lead a Rosary/Litany service immediately followed by a Chalice Presentation by Raisin River General Assembly 0488. Karl will lie in state at 10 a.m. Monday at St. Mary Catholic Church where Mass of the Resurrection will be celebrated by the church pastor, Rev. Fr. David Burgard at 11 a.m. Interment will follow at St. Joseph Cemetery with military honors provided by Monroe VFW Post 1138. For anyone wishing to make a memorial donation, the family suggests supporting St. Mary Catholic Church or Knights of Columbus Goodfellows (P.O. Box 544, Monroe, MI 48161).

Karl Mathe, age 90 of Monroe, passed away at 1:10 p.m. Wednesday, October 14, 2020 at Fountain View of Monroe. He had been in declining health for three months. Born on January 31, 1930 in Andreasberg, Germany, Karl was the fifth child... View Obituary & Service Information

The family of Karl Mathe created this Life Tributes page to make it easy to share your memories.

Send flowers to the Mathe family.