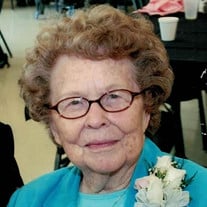 Julia Anne Hayes, 97 years, of Monroe, Michigan went home to be with the Lord on Monday, March 25, 2019 in her home and under the care of Promedica Hospice. Born April 26, 1921 in Tazewell, Tennessee, Anne was the daughter of the late Archie L. and Mima (Bailey) Brooks. The family moved to Monroe in 1925. On Christmas Eve in 1941, Anne married her beloved husband, Leo A. Hayes at the First Wesleyan Church Parsonage in Monroe. Sadly, Leo preceded her in her in death on June 30, 2002 after 60 years of marriage. Anne was a member of First Wesleyan Church in Monroe where she served on the board and taught Sunday School. She was a former member of the Order of Eastern Star. Anne was a wonderful homemaker and enjoyed; flower gardening, traveling, cooking, baking, and sewing with the ladies from her sewing circle. Most of all Anne enjoyed time spent with family. Anne is survived by three loving children; James A. (Paulette) Hayes of Monroe, Carol J. (Dale) Ely of Farmington, NM and Elaine S. (David) Guyer of Monroe, nine cherished grandchildren, 14 treasured great grandchildren, and three brothers; Hugh (Louise) Brooks of Sarasota, FL, Robert Brooks of Monroe, Ken Brooks of Monroe, and a sister in law; Beverly Brooks. In addition to her parents and husband, Anne was preceded in death by a sister; Rosemary, three brothers; Jay, Ben and Ron, and three sisters in law; Betty, Helen, and Margaret. Visitation will be held on Thursday, March 28, 2019 in the Bacarella Funeral Home, 1201 S. Telegraph Rd., Monroe, Michigan from 3:00 pm where funeral services celebrating her life will begin, that evening, at 7:00 pm. The Rev. Michael Gilbert, Chaplain at Promedica Hospice, will officiate. On Friday, March 29, 2019 interment services, officiated by the Rev. BJ McDaniel, will be held at Roselawn Memorial Park at 10:00 am. Anne's family would like to thank all her caregivers for their compassion and kindness. Memorial contributions are suggested to Promedica Hospice.

Julia Anne Hayes, 97 years, of Monroe, Michigan went home to be with the Lord on Monday, March 25, 2019 in her home and under the care of Promedica Hospice. Born April 26, 1921 in Tazewell, Tennessee, Anne was the daughter of the late... View Obituary & Service Information

The family of Julia Anne Hayes created this Life Tributes page to make it easy to share your memories.

Send flowers to the Hayes family.