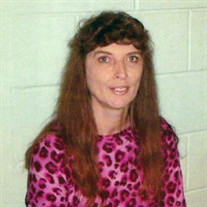 Judy M. Gibson, age 65 of Monroe, passed away Sunday, February 28, 2021 after being diagnosed with lung cancer in early December. Born December 14, 1955 in Middlesboro, Kentucky she was the daughter of the late Herbert and Ruth (Laws) Goins. Judy came to Monroe when she was just a baby. She attended Monroe High School. In June 1974 Judy married the love of her life, James Gibson in Toledo, Ohio. She worked at ProMedica Monroe Regional Hospital as a housekeeper for many years. Judy loved her family more than anything, she spent as much time with them as she could. When she was not with her family, she was playing bingo. Judy also loved the holidays, mostly because she got to put up decorations. She was a firecracker, and had no problem letting you know what was on her mind. Judy was also a jokester, she always put a smile on people’s faces. To cherish her memory, Judy leaves behind her husband James of 46 years; daughter April (Paul) Elliot of Monroe; sister Betty “Bunny” Jennings; six grandchildren: Katie (Dylan) Gibson, Davion Elliot, Salena Gibson, Harmony Elliot, River Elliot, and Taylor Hensley; six Great-grandchildren: Gunner, Ellie, Scott, Elijah, Gracie, Faith, and one more on the way. In addition to her parents, Judy is preceded in death by her son Scotty Gibson, six siblings: Gillis Goins, Clarence “Rod” Ball Jr, Jimmy “Crane” Ball, Billie Wayne Ball, Herbert Lee “Dude” Ball, and Norma “Janie” Keck. Visitation will be held on Monday, March 8, 2021 from 1:00 to 7:00 p.m. at Bacarella Funeral Home 1201 South Telegraph Road, Monroe, MI 48161. Services celebrating Judy’s life will begin at 11 a.m. on Tuesday, March 9, 2021. Rev. B.J McDaniel will be officiating. Memorial contributions in Judy’s memory are suggested to the family.

Judy M. Gibson, age 65 of Monroe, passed away Sunday, February 28, 2021 after being diagnosed with lung cancer in early December. Born December 14, 1955 in Middlesboro, Kentucky she was the daughter of the late Herbert and Ruth (Laws) Goins.... View Obituary & Service Information

The family of Judy Marie Gibson created this Life Tributes page to make it easy to share your memories.

Send flowers to the Gibson family.