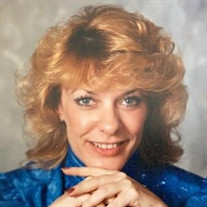 Joyce Weipert of Monroe, Michigan, passed on March 14, 2021. She was the daughter of the late Tilmon and Ruth (Jones) Braden. Joyce was born in Monroe on November 11, 1952, and lived her entire life in Monroe. She married Judge Michael A. Weipert on December 16, 1989. Joyce was a graduate of Monroe High School, worked as a Realtor with Richwine Realty, which became Scott Hudkins/Better Homes and Gardens, then moved on to work as property manager at a large apartment complex in Southfield, Michigan. She went on to further her education at Monroe County Community College, Eastern Michigan University, attaining a Bachelor’s in Psychology, and ultimately a Master of Social Work degree at the University of Michigan. Joyce was employed at Greenbrooke Manor in Monroe, now Medilodge of Monroe, and her husband’s law firm, Weipert & Weipert. As a social worker, she served as a therapist, case manager, counselor and advocate for children, consumers and persons with disabilities at Greenbrooke, the Monroe County Mental Health Authority, Catholic Charities of Monroe County, Inc. and Caring Alternatives, Inc. She also served as a Hospice volunteer. She was the driving force in her husband’s election pursuits, ultimately resulting in his election as circuit court judge. Joyce was very active with her husband in community endeavors, especially with the Bedford Business Association and its’ Trade Fair, and Holiday Camp, Inc. In approximately 2009, Joyce was stricken with Frontotemporal Dementia, a disease akin to Alzheimer’s, which, as her husband stated: “…robbed us of one of the most vibrant and outgoing persons ever. It is amazing to have learned of all the people she had touched over the years in our community.” Joyce loved traveling to warm climates and with her sister-in-law, Deb, was an avid Parrot Head, loving everything Jimmy Buffett. She was lovingly cared for by several caregivers, most notably her first cousin, Lou Maurice, grandson, Dylan, Karon Eagle and Whitney Moss-Morgan. Joyce is survived by her husband, daughter, Kellie, grandson, Dylan Michael Osborne, granddaughter, Sydney Mae Stefko, sister, Joan Burke and her daughters Angie and Kristie, and nephews Keith and Corey Keister. She was preceded in death by her parents and her sister, Beverly Keister. Services will be private. Bacarella Funeral Home is assisting the family with arrangements. If anyone would like to make donations in memory of Joyce, suggestions would include Holiday Camp, Inc. of Monroe, Saint Mary Catholic Central, the Monroe County Community College Foundation, the Alzheimer’s Association of Southeastern Michigan, or any charity of choice. Online condolences and special memories may be shared with the family by visiting the obituary page at www.bacarellafuneralhome.com.

Joyce Weipert of Monroe, Michigan, passed on March 14, 2021. She was the daughter of the late Tilmon and Ruth (Jones) Braden. Joyce was born in Monroe on November 11, 1952, and lived her entire life in Monroe. She married Judge Michael... View Obituary & Service Information

The family of Joyce Weipert created this Life Tributes page to make it easy to share your memories.

Customized sympathy cards. Mailed for you.