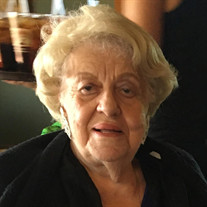 Josephine (Castellese) Vokes, 92, of Monroe, passed away January 11, 2019, with her family by her side. Born January 5, 1927 in Monroe, Josephine (Josie) was the daughter of the late Nicolo and Anna (Colucci) Castellese. She was a 1944 graduate of St. Mary’s Academy. On November 6, 1948 Josephine married the late John W. Vokes in St. Joseph’s Catholic Church. Josephine co-owned and operated Nick Castel’s Supermarket from 1953 until the store was sold in 1989. She enjoyed sharing stories of the early years in the store, where at a very young age, she worked side by side with her beloved father Nick. Josephine was a true force of nature, and will be remembered by most for her fiery spirit, superior cleaning abilities and outstanding cooking. Over the past few weeks many friends and family members visited and called Josephine, with most making sure to capture some of her recipes, most notably her meatballs, fried artichokes and her homemade bread. In recent years, Josephine found great joy in both spending time with, and hearing stories of the daily antics of her three adored great-grandchildren Addi, Grant and Viv. She was thrilled to learn of the birth of her fourth great-grandchild Camden John, on January 5th, her 92nd birthday. Josephine is survived by her two loving daughters: Barbara V. (Rick) Gainey of Canton, MI. and Amy E. Vokes (Laura BonDurant) of Washington, D.C., four cherished grandchildren: Ryan (Nicole) Gainey, Megan (Joe) DeVerna, Matt Gainey, and Evan (Allison) Gainey, four treasured great-grandchildren: Addison and Grant DeVerna, and Vivian and Camden Gainey, one sister: Margaret (Joseph) Carollo and many nieces and nephews. In addition to her parents, Josephine was preceded in death by her husband John W. Vokes, two sisters: Mary Barbara Mongeon and Elizabeth Basile, and her brother Alex Castellese. Visitation will be held from 2 p.m. until 8 p.m. Tuesday, January 15, 2019, at Bacarella Funeral Home, 1201 S. Telegraph Road, Monroe, MI, 48162. Services celebrating Josephine’s life will begin at 11 a.m. Wednesday, January 16, 2019, also at Bacarella Funeral Home. Interment will follow at St. Joseph Cemetery, Monroe. Memorial contributions may be made to one of Josephine’s favorite organizations, St. Jude’s Children’s Research Hospital. Online condolences, and special memories, may be shared with the family by visiting the obituary page at www.bacarellafuneralhome.com.

Josephine (Castellese) Vokes, 92, of Monroe, passed away January 11, 2019, with her family by her side. Born January 5, 1927 in Monroe, Josephine (Josie) was the daughter of the late Nicolo and Anna (Colucci) Castellese. She was a 1944... View Obituary & Service Information

The family of Josephine C. Vokes created this Life Tributes page to make it easy to share your memories.

Send flowers to the Vokes family.