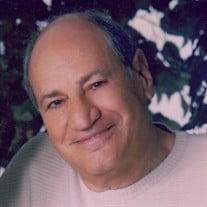 Joseph Giarmo, 84 years, of Monroe, Michigan, went home to be with the Lord on Tuesday, September 22, 2020, with his loving family at his side while listening to his favorite song, “Piccolo Fiore”. Born July 21, 1936 in Borgetto, Sicily, Joe was the son of the late Gaspare and Santa (Giambrone) Giarmo. Joe moved to Monroe in 1956 from Borgetto. On April 25, 1959, Joe married his beloved wife, the former Catherine “Tina” Cusumano, at St. Joseph Church in Monroe with Fr. John Vanadia as the celebrant. Joe worked at Ford Monroe Stamping Plant for 38 years. He retired in 1994 as a hi lo driver. Additionally, he and his wife owned and operated Joe’s Pizzeria in Monroe, MI from 1978 to 1987. After retirement, they spent their winters in Florida. Joe was a member of St. Michael the Archangel Catholic Church in Monroe, MI. During the years that his children attended the school, he was active in the Dad’s Club. Joe also enjoyed hunting, playing cards, trips to the casino, long walks, and listening to and singing Italian music. No one was a stranger to Joe; he had the ability to talk to anyone he met. He had a kind heart and a wonderful sense of humor. Whenever possible, Joe would attend his children’s and grandchildren’s events; he especially loved watching them play sports. He would often spend Friday nights on the sideline watching his sons, Jack and Gasper, coach football. Most of all Joe loved time spent with family. One of his greatest joys was telling stories of the “Old Country” to his grandchildren. Joe is survived by his beloved wife of 61 years, Tina, three loving children: Jack (Tracie) Giarmo of Monroe, MI, Sandy (Todd) Sobieralski of Monroe, MI, Maria (Pete) Noble of Grand Ledge, MI, a daughter-in-law, Pamela Giarmo of Byron Center, MI, ten cherished grandchildren: Joseph and Matthew Giarmo, Anthony (Kaitlyn Martin) Giarmo, Carlie (Greg) Watson, Jacquelyn (Jason) George, Kristin (Jacob) Beste, CJ (Molly Petersen) Wolfenbarger, Christopher Wolfenbarger, Catherine Noble, and Austin (Ashley) Noble, two treasured great-grandchildren: Liam George and Emery Noble, four siblings: Marianne (Frank) Furnari of Monroe, MI, Mary (Vito) Gaglio of Southgate, MI, Joanne Agner of Belleville, MI, Sam (Nancy) Giarmo of Monroe, MI, and a sister-in-law, Josephine “Pina” Giarmo of Monroe, MI. In addition to his parents, Joe was preceded in death by his son, Gasper, on January 3, 2020 a grandson, Nicholas Sobieralski, and two brothers, Rosario and Salvatore. Visitation will be held on Sunday from 1-8 pm at the Bacarella Funeral Home, 1201 S. Telegraph Rd., Monroe, Michigan, 48161, where at 6:30 pm a time of sharing stories and thoughts with family and friends will be held. A Rosary service will follow at 7:00 pm. On Monday, September 28, 2020, he will lie in state at St. Michael the Archangel Catholic Church from 10:00 am until Mass of the Resurrection celebrating Joe’s life at 11:00 am. Fr. Kishore Battu, pastor of the church, will officiate. Interment will follow at St. Joseph Cemetery in Monroe, MI. Memorial contributions are suggested to SMCC High School or Promedica Hospice.

The family of Joseph Giarmo created this Life Tributes page to make it easy to share your memories.

Joseph Giarmo, 84 years, of Monroe, Michigan, went home to be...

Send flowers to the Giarmo family.