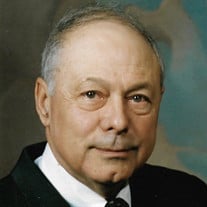 Joseph (Joe) Gasper Ciravolo was a first-generation Italian-American born on January 5, 1938 to Gasper and Josephine (Liparoto) Ciravolo in Detroit, MI. After the death of his father in 1943, the family moved to Monroe, Michigan. He... View Obituary & Service Information

The family of Joseph G. Ciravolo created this Life Tributes page to make it easy to share your memories.

Send flowers to the Ciravolo family.