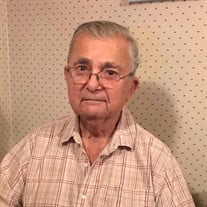 John J. “Frank” Rafko, 87 years, of Monroe, Michigan, went home to be with the Lord on Tuesday, October 13, 2020 in his home. Born November 26, 1932 in Southfield, Michigan, Frank was the son of the late Frank Jackson and Helen Rafko. He attended Monroe High School. Frank served his country honorably and proudly as a Corporal in the United States Army during the Korean War. Frank served from June 19, 1950 to September 26, 1952. He received a Purple Heart for his heroism. On February 25, 1954 Frank married the former, Donna J. Stilwell in Monroe. Frank was employed as a chemical mixer at Chrysler Chemical in Trenton, MI until his retirement in 1989. Frank was a member of Grace Lutheran Church and its Men’s Club, a life member of VFW Post 1138 in Monroe, AMVETS, and U.A.W. Local #372. He enjoyed fishing, hunting, trapping, working in his yard, and both flower and vegetable gardening. Most of all Frank enjoyed time spent with family. Frank is survived by his beloved wife of 66 years, Donna; four loving children: Frank Rafko of Monroe, Susan Rafko (Gaylord) Bayer of Monroe, David (Dawn) Rafko of Monroe, and Andrew (Mary Kay) Rafko of Erie; four cherished grandchildren: Daniel (Jamie) Rafko, James (Ariel) Rafko, Amber (Dane) Stritt, and Erica Rafko; four treasured great grandchildren: twins, Madison and Morgan Revard, Colin Assenmacher, and Jacob Rafko; and two sisters, Barb Budds and Sherry Dresser. In addition to his parents, Frank was preceded in death by a granddaughter; Stephanie Rafko, a brother; Raymond Jackson and two sisters; Patricia and Irma. Visitation will be held on Sunday from 2-7 pm in the Bacarella Funeral Home, 1201 S. Telegraph Rd., Monroe, Michigan, 48161. On Monday, October 19, 2020 he will lie in state at Grace Lutheran Church in Monroe from 10:00 am until funeral services celebrating his life at 11:00 am. The Rev. Mark Witte, pastor of the church, will officiate. Interment will follow at Roselawn Memorial Park where the VFW Post 1138 will conduct military honors. Memorial contributions are suggested to Grace Lutheran Church.

The family of John J. "Frank" Rafko created this Life Tributes page to make it easy to share your memories.

Send flowers to the Rafko family.