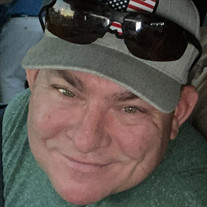 Sergeant John William Palmer, age 53 of Toledo, passed away Tuesday, August 11, 2020, at the University of Tennessee Medical Center after suffering a major stroke while vacationing with family in Pigeon Forge, Tennessee. A memorial service in celebration of John’s life and his 27 years of dedicated service to the Toledo Police Department is scheduled for Saturday, August 22, 2020. The celebration will be held at Sylvania Northview High School Performing Arts Center where John served as Northview’s Junior Varsity baseball coach. Visitors may begin arriving at 10am with the memorial starting at 11am. Toledo Police Lieutenant Bryan Hollingsworth will officiate in conjunction with military honors provided by the US Marine Corps. Bacarella Funeral Home of Monroe, MI is assisting the family. John was born on July 18, 1967 in Toledo, Ohio to Raymond William (Bill) Palmer and Irene (Morrissey) Palmer. He graduated from St. Francis High school in 1985 and soon after joined the US Marine Corps. After serving two enlistments, on October 23, 1992, John was hired by the Toledo Police Department. During his career, John worked in the Mounted Unit, Field Operations Division, and as Sergeant in the Communication Division. He previously attended Owens Community College and the University of Toledo. On October 30, 2013, John married his longtime love, Melissa Jean Cuthbert of Monroe, Michigan in Naples, Florida. John was an avid sports fan of baseball, basketball, football, and softball. He played baseball for many years and annually competed in the Roy Hobbs World Series Tournament in Fort Myers, Florida. As a huge fan of the Ohio State Buckeyes, John especially enjoyed the current run of victories over the University of Michigan Wolverines. John was a loyal police officer, a proud Marine, a loving husband, respected teammate, uplifting coach, and a devoted friend who will always be remembered for his sharp wit, playful and often humorous sarcasm, and his brilliant sense of humor. John will be deeply missed by his wife, Melissa; his parents, Bill and Irene; sister, Megan (David) Avalos; brother, Gary (Emily) Palmer; 14 nieces and nephews; two special Godchildren, Ava Schroeder and Matilda Cuthbert; many extended family members and countless friends. John was preceded in death by his brother, David Palmer, and an uncle, George Palmer.

The family of John William Palmer created this Life Tributes page to make it easy to share your memories.

Send flowers to the Palmer family.