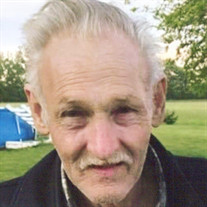 John W. Mabe, age 76 of Ida, went home to be with the Lord at 9:02 p.m. Friday, January 8, 2021, surrounded by his loving family, after a lengthy illness. Born November 30, 1944 in Strawberry Plains, Tennessee, he was the son of the late George and Bessie (Cook) Mabe. John moved to Monroe from Tennessee with his family in 1951. He attended Jefferson High School, graduating with their first graduating class in 1963. He served his county honorably in the United States Army during the Vietnam War. After returning home, John moved to Plano, Texas, where he worked as a Computer Operations Specialist for Alcatel Corporation until his retirement in 2000, returning to Monroe shortly thereafter. After his retirement, John began working for Monroe Sports Center doing a variety of jobs, primarily as a Janitor and Maintenance Man. John enjoyed woodworking and building things. He loved people and could often be found telling interesting stories. John also spent time making videos of pictures of his friends and family, which were accompanied by music. Most of all he cherished his siblings and nieces and nephews. To cherish his memory, John leaves two brothers, James (Beverly) Mabe of Grand Prairie, Texas, and Jack Mabe of Dallas, Texas; three sisters: Wanda Weiler of Ida, Mary Cunningham of Princeton, Texas, and Betty Matousek of Plano, Texas; and many loved nieces and nephews. In addition to his parents, he was preceded in death by two sisters, Maxine Berry and Ann Talsma; and five brothers-in-law: Jewel Berry, Lee Weiler, George Cunningham, Boyd Johnson, and Duane Matousek. Visitation will be held from 11 a.m. until 2 p.m. Wednesday, January 13, 2021, at Bacarella Funeral Home, 1201 South Telegraph Road, Monroe, MI 48161, where services celebrating his life will begin at 2 p.m. Rev. Andrew Leaman, Pastor of Gracepointe Church, will officiate. Due to the COVID-19 pandemic, visitation will be limited to twenty-five persons at a time and those attending are asked to wear face coverings and maintain social distancing guidelines. Military honors will be under the auspices of VFW Post 1138 Monroe. Entombment will follow at St. Joseph Cemetery, Monroe. John’s family would like to express a very special, heartfelt thank you to the caregivers and staff of Grace Hospice for the tireless care they provided to John over the past year. Memorial contributions in John’s memory are suggested to Grace Hospice or VFW Post 1138 Monroe. Online condolences and special memories may be shared with the family by visiting the obituary page at www.bacarellafuneralhome.com.

The family of John W. Mabe created this Life Tributes page to make it easy to share your memories.

Send flowers to the Mabe family.