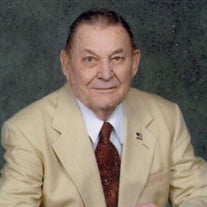 John Joseph Gabriel, age 86, of Monroe, went home to be with the Lord at 2:14 a.m. Sunday, January 17, 2021, surrounded by his loving family in his home. Born May 31, 1934 in Romulus, Michigan, he was the son of the late Frank and Johanna (Drozanowski) Gabriel. He attended Mt. Carmel High School in Wyandotte, Michigan, graduating with the class of 1952. John married the love of his life, Rosaline Lesniewicz, on September 5, 1959 at St. John the Baptist Catholic Church, Ypsilanti. While growing up he worked on his family’s farm and began working for DT&I Railroad in 1956, continuing with Grand Trunk Railroad after it acquired DT&I; after forty years of service, John retired in 1996. He continued to farm throughout his career and well into his retirement. John and Rosaline lived in Florida for ten years where they were members of the Michigan Club. He was a member of St. Stephen Catholic Church and the Temperance Council Knights of Columbus. John was a sweet guy whose greatest achievement was raising a loving family. He was immensely proud of his children and grandchildren. He loved spending holidays with his family, the more hectic, the better. He enjoyed farming and hunting deer and turkey with his son, John, in Irish Hills. John was also an avid golfer. To cherish his memory, John leaves his wife of sixty-one years, Rosaline of Monroe; five children: John (Kim) Gabriel of Brooklyn, Michigan, Andrew (Stephanie) Gabriel of Dundee, Lorna (Bill) Tucker of Monroe, Patrick (Robin) Gabriel of Carleton, and Anthony (Amy) Gabriel of Maybee; two siblings, Edward Gabriel of Shepard, Michigan, and Lucille (Edward) Bin of Farmington, Michigan; thirteen grandchildren; five great-grandchildren, with twins on the way; and his beloved dog, Kody. In addition to his parents, he was preceded in death by six siblings: Francis, Bernard, Tom, Michael, Theresa, and Barbara. Memorial contributions in John’s memory are suggested to St. Stephen Catholic Church, New Boston. Visitation will be held on Thursday, January 21, 2021 from 2 p.m. until 7 p.m. at Bacarella Funeral Home, 1201 S. Telegraph Road, Monroe, MI 48161. The Rosary will be recited by the Temperance Council Knights of Columbus at 6 p.m. He will lie in state at St. Stephen Catholic Church, New Boston, at 10 a.m. Friday, January 22, 2021, where Mass of Christian Burial will be celebrated by the church pastor, Rev. Fr. John Hedges. Interment will follow at Michigan Memorial Park Cemetery, Flat Rock. Online condolences and special memories may be shared with the family by visiting the obituary page at www.bacarellafuneralhome.com.

The family of John Joseph Gabriel created this Life Tributes page to make it easy to share your memories.

Send flowers to the Gabriel family.