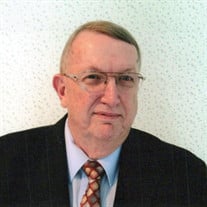 Jerry T. Spence, age 75, of Monroe passed away Wednesday, April 6, 2022 at St. Joseph Mercy Hospital, Ann Arbor. Jerry was born July 4, 1946 in Monroe, MI. He was the son of Clyde T. and Doris M. (Teufel) Spence. He married Shirley M. (Boicken) Green January 14, 1983. He was a 1964 graduate of Monroe High School, obtained his Bachelor of Science degree from Ferris State University in 1969 and his Master’s Degree from Central Michigan University in 1995. Jerry served his country in the U.S. Army from 1969 until his honorable discharge in 1971 with the rank of Specialist E-5. He began his career working for Bargain City in various management positions. He then worked for the Michigan Employment Security Commission as a claims specialist. From there he went to Monroe County Employment and Training Office (Michigan Works!), spending more than 20 years there and retiring in 2006 as the Training Coordinator. Jerry was a lifetime member of St. Paul’s United Methodist Church, where he was an usher. He also served on various committees, including the annual club party for the graduates of Monroe High School, serving as chairperson for the class of 2003. He was a member of Monroe Kiwanis Club, serving on various committees and was a member of the Board of Directors. He received their George F. Hixson Award for outstanding service in September of 2015. In his younger days he enjoyed bowling and playing recreational softball and volleyball. He enjoyed the outdoors, playing golf, traveling and visiting many of America’s National Parks. He loved working in his yard with his various gardens and flowerbeds. He was also a fan of the Detroit Tigers and Michigan football. He is survived by his wife, Shirley; two children, Bryan Spence and Dawn (Mark) Elias and their four children, Nicholas, Gabrielle, Malina and Maxwell Elias; a sister-in-law, Marcia Spence; nephew, Matthew (Laura) Spence; niece, Amy (Dennis) Blanchette and niece-in-law, Terri Spence. Jerry is preceded in death by his parents, a brother Jack Spence and two nephews, Scott and Bradley Spence. Visitation will be held from 2 – 7 p.m. Sunday, April 10, 2022 at Bacarella Funeral Home, 1201 S. Telegraph Rd., Monroe. He will lie instate at 10 a.m. at St. Paul’s United Methodist Church, 201 S. Monroe St., Monroe, with funeral services at 11 a.m. Rev. Melodye Surgeon VanOudheusden, pastor of the church, will officiate. Interment will follow at St. Joseph Cemetery, Monroe. The family suggests memorial donations to St. Paul’s United Methodist Church, Salvation Army or Oaks of Righteousness. Online condolences and special memories may be shared with the family by visiting the obituary page at www.bacarellafuneralhome.com.

The family of Jerry T. Spence created this Life Tributes page to make it easy to share your memories.

Send flowers to the Spence family.