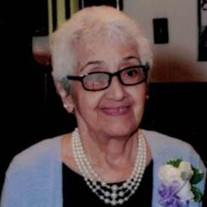 Jennie E. Bacarella, 93 years, a lifelong resident of Monroe, Michigan, went home to be with the Lord on Monday, May 27, 2019 at the IHM Senior Living Community. Born January 2, 1926 in Monroe, Jennie was the daughter of the late Rosario and Antonina (Terrasi) Pollzzie. Jennie was baptized and confirmed at St. Joseph Catholic Church in Monroe. She attended St. Joseph Grade School and was a 1944 graduate of Monroe High School. On January 20, 1950, Jennie married her beloved husband William J. “Herm” Bacarella, Sr. at St. Joseph Catholic Church. Sadly, he preceded her in death on May 31, 2008 after 58 years of marriage. Jennie was a member of St. Michael the Archangel Catholic Church where she was on the Altar Society and helped with funeral luncheons. She was also a member of The Comboni Missionaries Ladies Guild, the Monroe Thrift Shop, and the Mercy Memorial Hospital Guild. Jennie was a wonderful wife, mother, grandmother, and homemaker. She enjoyed baking, cooking, and caring for her family. She also worked outside the home at Sears, Spiegel’s, Monroe YMCA and as a supervisor at Michigan Bell. Jennie will be remembered as a community minded person who enjoyed talking to everyone she met. She would open her home and her kitchen table for family as well as friends. The best memories of her family and friends were of spending time around her kitchen table laughing, talking (and talking) and sharing her amazing food. And each grandchild and great grandchild knew where the “goodie” drawer was. Most of all Jennie enjoyed time spent with family. Jennie is survived by three loving children; William J. (Kathleen) Bacarella, Jr. of Monroe, John C. (Barbara) Bacarella, DDS of Monroe and Mary Martha Bacarella of Seattle, WA, seven cherished grandchildren; Angela (Jeff) Wood, Andrea (Jon) Keck, Cristina (Nick) Phillips, William J. (Katherine) Bacarella, III, Joanna Bacarella, Alexander Bacarella, and Olivia K. Bacarella, four treasured great grandchildren; Sean, Gabriella, Jacob, and Victoria, and her best friend and sister in law; Josephine T. Pollzzie. In addition to her parents and husband, Jennie was preceded in death by two brothers; Ben and Frank, and five sisters; Josephine Vadun, Lena Balk, Kathryn Babin, Mary Ochs, and Angelina Geno. Visitation will be held on Thursday from 2-8 PM in the Bacarella Funeral Home, 1201 S. Telegraph Rd., Monroe, MI, 48161, where a Rosary Service will be held that evening at 6:00 PM. On Friday, May 31, 2019 she will lie in state at St. Michael the Archangel Catholic Church from 10:45 am until Mass of the Resurrection celebrating her life at 11:30 am. Fr. Philip Ching, pastor of the church, will officiate. Entombment will follow at St. Joseph Cemetery in Monroe Memorial contributions are suggested to Holiday Camp, St. Michael the Archangel Catholic Church, Monroe County Community College, or a charity of the donor’s choice.

Jennie E. Bacarella, 93 years, a lifelong resident of Monroe, Michigan, went home to be with the Lord on Monday, May 27, 2019 at the IHM Senior Living Community. Born January 2, 1926 in Monroe, Jennie was the daughter of the late Rosario... View Obituary & Service Information

The family of Jennie E. Bacarella created this Life Tributes page to make it easy to share your memories.

Send flowers to the Bacarella family.