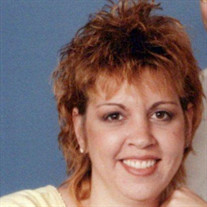 Janice M. Trouten, age 55, of Monroe, passed away Friday, August 27, 2021, in her home surrounded by family. Janice was born September 30, 1965, in Dearborn, MI. She was the daughter of George and Elaine (Czarnecki) Burgess. She was a 1983 graduate of St. Mary Academy. She married James E. Trouten on October 15, 1988. They resided in Monroe, MI at an old stagecoach stop ever since. Janice had a passion for her family, caring for her daughters, grand-daughters, and anyone in-between. She had a connection with many friends and family and made them feel at home, no matter the circumstance. While she was primarily a homemaker, Janice had a creative streak that touched the lives of many. She was a florist at both North Monroe Greenhouse and Deb’s Flowers. She operated Hidden Peacock and designed wedding flowers for friends and family. She planned extravagant parties and her creativity knew no bounds. She was very generous with her talents. She is survived by her husband, Jim Trouten of Monroe; mother, Elaine Burgess of Canton; three daughters, Jessica Laming of Monroe, Josephine Trouten of Westhampton, NJ and Julia (Anass) El Bekkari of Cleveland, OH; one brother, Jeffery (Julie) Burgess; a 100-year-old mother-in-law, Marie J. Trouten; four granddaughters, Jasmine and Angela Gonzales, Rosalie and Adelyn Laming and one great granddaughter, whom will be named Jennifer Marie. She is preceded in death by her father George Burgess, daughter Jennifer Pokerwinski, and sister Laurie Burgess. A Memorial Mass will be held on September 14, 2021, at St. John the Baptist Catholic Church, 511 S. Monroe St. Monroe, MI at 11:00 AM. Online condolences and special memories may be shared with the family by visiting the obituary page at www.bacarellafuneralhome.com.

Janice M. Trouten, age 55, of Monroe, passed away Friday, August 27, 2021, in her home surrounded by family. Janice was born September 30, 1965, in Dearborn, MI. She was the daughter of George and Elaine (Czarnecki) Burgess. She was a 1983 graduate... View Obituary & Service Information

The family of Janice M. Trouten created this Life Tributes page to make it easy to share your memories.

Send flowers to the Trouten family.