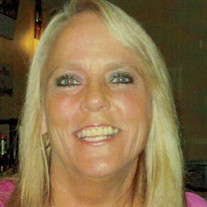 Janet K. Bullock, 65 years, of Riverview, Michigan, went home to be with the Lord on Wednesday, August 19, 2020 at Beaumont Hospital in Trenton, Michigan. Born February 28, 1955 in Wyandotte, Michigan, Janet was the daughter of the late Arthur and Lillian (Michaelis) Dalton. She was a 1973 graduate of Lincoln Park High School. Janet worked as a bartender for various establishments in the down river area most notably, J Dub’s. She also worked for TSI Trucking in Romulus as a secretary for 20 years, from which she retired in 2015. Janet was of the Episcopalian faith and worked three jobs at times to take care of her family. She enjoyed playing cards, gardening and traveling. Most of all Janet enjoyed time spent with family. Janet is survived by her loving daughter and her fiancé; Lindsay K. (Jake M. Arnold) Bullock of Riverview, three cherished grandchildren; Lillian, Adryannah, and Lacie, a brother; Arthur A. Dalton of Irish Hills, MI, and three step sisters; Barbara (Don) Wismeg of Florida, Kathy Renner of Wyandotte, MI, and Sue Lain of Columbiaville, MI. In addition to her parents, Janet was preceded in death by her stepfather; Frank Renner, a brother; Michael Dalton and a sister; Judith Castellese. In keeping with Janet’s wishes, cremation will be held. Services have been postponed, but will be held at Our Lady of Hope Cemetery in Brownstown, Michigan. Memorial contributions are suggested to ASPCA or the Michigan Humane Society. Bacarella Funeral Home, 1201 S. Telegraph Rd., Monroe, Michigan is assisting Janet’s family with funeral arrangements.

Janet K. Bullock, 65 years, of Riverview, Michigan, went home to be with the Lord on Wednesday, August 19, 2020 at Beaumont Hospital in Trenton, Michigan. Born February 28, 1955 in Wyandotte, Michigan, Janet was the daughter of the late... View Obituary & Service Information

The family of Janet K. Bullock created this Life Tributes page to make it easy to share your memories.

Send flowers to the Bullock family.