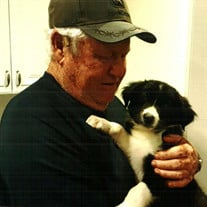 James Douglas “Doug” Johnson, age 79 of Monroe, went to be with his Lord at 11:45 a.m. Wednesday, February 9, 2022. Doug was born July 17, 1942 to Charles and Della (Nichols) Johnson in Essex, Ontario, Canada. He was a 1960 graduate of Ida High School and attended Michigan State University where he studied architecture and agricultural sciences and was active with the ROTC. Doug and his wife, Wilma Webb Johnson were together more than 55 years. He was dedicated to his family and the family farm, which his family bought in 1956. He is survived by his wife, Wilma, and two brothers: Clifford Wayne (Jayne) Johnson and Carl Bruce (Sondra) Johnson, both of Monroe and many nieces and nephews. Doug is preceded in death by his parents and ten siblings: Lloyd C. Johnson, Weaver G. Johnson, D.C. Johnson, Ruby Fowler, Della Mae Robinson, Opal G. Pelfrey, Alma A. Magee, Charles E. Johnson, Albert O. Johnson and Parkes R. Johnson. Visitation will be held on Monday, February 14, 2022 at 11 a.m. at the Dunbar Road Church of Christ at 3470 E. Dunbar Road in Monroe. Services will begin at 12 noon Monday. Brother André King, minister of the church, will officiate. Interment will follow at Roselawn Memorial Park in LaSalle. Memorial contributions can be made to the Dunbar Road Church of Christ.

The family of James Douglas Johnson created this Life Tributes page to make it easy to share your memories.

Send flowers to the Johnson family.