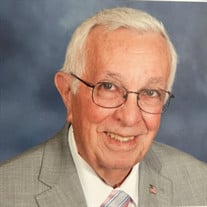 James D. Johnson, age 79 of Monroe Michigan, passed away in his home on Thursday, November 4, 2021, under the care of ProMedica Hospice of Monroe. Jim was born May 14, 1942 in Monroe Michigan to Orville L. and Helen C. (Buck) Johnson. He is survived by his wife Frankie (Hall) Jones, who he married on Nov 13, 2004. He never had children of his own, but was blessed with step-children he called his own: Edward C. Jones, Gregory A. Jones and Sherry L. Jones; grandchildren: Molly E. Jones and Ian C. Golding; step-grandson, Brady Ambrose; two nephews, Lee (Wanda) Kent and Donald (Jackie) Kent; one niece Beth Kent. In addition to his parents, he was preceded in death by his first-wife, Louise Johnson; sister, Elizabeth (Donald) Kent; granddaughter, Chasity Reese; and grandson, Toby Murdock. He was a 1960 graduate of Monroe High School. He worked for Monroe Parks and Recreation, Sears Roebuck, Consolidated Packaging Corp, National Life and Accident Insurance Company, and was an Electrician for General Motors, Powertrain Division in Toledo Ohio. He retired from GM in 2001 after 26 years. Jim served in the United States Navy from January 6, 1961 until being honorably discharged on December 14, 1964. He served in Patrol Squadron Eleven (Up-11) AX2 during the Cuban Missile Crisis. Jim was a member of Monroe VFW Post 1138 and a charter member of Heritage Baptist Church where he served as a Trustee and Discipleship Training Leader. He was also active in the men's Tuesday night study group and VBS. He was appreciative of the opportunity to be a part of a mission trip to Israel to work at the Baptist Village and the times he served with Disaster Relief for Hurricanes Rita and Katrina. Jim’s hobbies included golf and genealogy. He loved taking his grandson Ian to hit a bucket of golf balls and golfing 9 holes. He also loved to play the accordion while letting Molly and Ian play the keys. The family would like to thank Dr. Kabir and staff for the care they provided, and to Promedica Hospice for the care given to Jim. Memorial donations may be made to Heritage Baptist Church Building Fund or ProMedica Hospice. Visitation at Bacarella Funeral Home will be from 2 p.m. to 7 p.m. Sunday, Nov. 7th. Jim will lie in state Monday at 10 a.m. at Heritage Baptist Church (612 Strasburg Rd, Monroe Michigan 48161) where services will begin at 11 a.m. The church pastor, Rev. Nate Click will officiate. Burial will follow at Roselawn Memorial Park with military honors provided by Monroe VFW Post 1138. Online condolences and special memories may be shared with the family by visiting the obituary page at www.bacarellafuneralhome.com.

James D. Johnson, age 79 of Monroe Michigan, passed away in his home on Thursday, November 4, 2021, under the care of ProMedica Hospice of Monroe. Jim was born May 14, 1942 in Monroe Michigan to Orville L. and Helen C. (Buck) Johnson.... View Obituary & Service Information

The family of James D. Johnson created this Life Tributes page to make it easy to share your memories.

James D. Johnson, age 79 of Monroe Michigan, passed away in his...

Send flowers to the Johnson family.