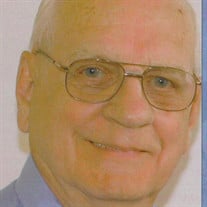 James “Jim” Gaylord Vandercook, 88, of Monroe, Michigan passed away on Monday, September 9, 2019 in the comfort of his home. He was born on July 9, 1931 in Dundee, Michigan to Gaylord and Hazel (Miller) Vandercook. He married Patricia L. Bolinger on November 15, 1952 in Angola, Indiana. Jim was a strong and humble man, probably known best for serving others. He served his country from 1949 to 1953 as a Sergeant in the U.S. Army and fought in the Korean War. He served his Lord and Savior, Jesus Christ as a charter member of Dundee Baptist Church, where he was chairman of the deacons for many years. He also served his neighbors by mowing grass for those who were unable well into his senior years. Many would call him a hero. Jim was employed by Ford Motor Company in Monroe for 35 years as a machine repairman, retiring in 1991. Jim’s family was his pride and joy. There was nothing he wouldn’t do for any of his five children, 15 grandchildren, or 29 great-grandchildren. In addition to spending time with his loved ones, he also enjoyed bowling and gardening in his free time. In addition to his parents, Jim is preceded in death by his daughter, Susan (Vandercook) Szirony; his brothers, Robert, Donald, William, Russell, John, Ray, Rolland, Marvin and Gerald Vandercook; and sister-in-law, Betty Vandercook. He is survived by his wife of over 66 years; his children, James (Michele) Vandercook II of Ida, Kim (Robert) Simmons of Toledo, Karen (Greg) Elder of Monroe, and Jennifer (Michael) Burkhardt of Toledo; son-in-law Charles Szirony of Toledo; his grandchildren, Jeremy, Robert, Justin, Michael, Jordan, James, Josh, Jason, Jared, Shayne, Sarah, Joel, Ashley, Alyssa, and Benjamin; 29 great-grandchildren; his siblings, Helen Hyden , Larry and Edwin Vandercook all of Monroe., and many nieces and nephews. Family and friends may visit from 4 p.m. to 8 p.m. Thursday and Friday at Bacarella Funeral Home, 1201 S. Telegraph Rd. where services will be held at 10 a.m. Saturday, September 14, 2019. Rev. Harold Raymond, Pastor of Dundee Baptist Church will officiate followed by burial at Roselawn Memorial Park with military honors provided by VFW Post 1138 of which he was a life member. In lieu of flowers, the family suggests making a memorial contribution to St. Jude Children's Hospital or Dundee Baptist Church.

James &#8220;Jim&#8221; Gaylord Vandercook, 88, of Monroe, Michigan passed away on Monday, September 9, 2019 in the comfort of his home. He was born on July 9, 1931 in Dundee, Michigan to Gaylord and Hazel (Miller) Vandercook. He married Patricia... View Obituary & Service Information

The family of James "Jim" Gaylord Vandercook created this Life Tributes page to make it easy to share your memories.

Send flowers to the Vandercook family.