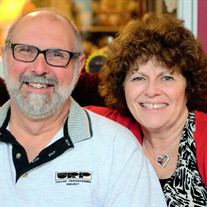 James R. and Cynthia S. West of Monroe, passed away Thursday, December 26, 2019 due to injuries they sustained when they were struck while riding their motorcycle in Britton, MI. Both born in Monroe, Jim was the son of Herbert and Evelyn (Weisbecker) West on August 29, 1952. Cindy was born to Homer and Madeline (Burgard) Ausmus on September 13, 1954. Jim was a 1970 graduate of Monroe Catholic Central High School and Cindy graduated from St. Mary Academy in 1972. Cindy worked her whole career in childcare, first at St. John's Catholic School as a playground supervisor and classroom aide, and later at Ms. Tina's Licensed Daycare. Her love of children was never more evident than when she was with any of her five grandchildren. Her “kids” as she called them, were guaranteed the full grandma treatment any time they came to visit and the promise of “Camp Westwoods” during the summer months was looked forward to with anticipation and delight. Besides spoiling grandchildren, she was an avid gardener; spending long days working in her flower beds from early spring to late fall. She loved nature, and walking her extensive property with a grandchild or two in tow was a favorite pastime. She loved all things Michigan and devoted much of her social media energy promoting the products of local Michigan companies. The numerous motorcycle excursions she would take with her husband Jim brought them through countless small towns, where they were sure to find ice cream, as well as some new friends. She was kind and generous, always willing to help a friend in need, and often going well beyond what was expected. She was never more satisfied than when she was using her many talents for the benefit of others. She will forever be remembered for her boundless love and energy, her contagious laugh, and her apple pie. Jim spent his entire career as a pipefitter with Local 671 Plumbers and Pipefitters Monroe. While working on the construction of Fermi II in the late 70s, he met Cindy Ausmus who worked in one of the blueprint trailers at the time. They married on May 25, 1984 and settled down in Monroe to raise their family. He had a true passion for cars and harbored a dream of auto racing throughout his life. Though participating in some Enduro races at Flat Rock Speedway when he was in his 30s, his dream wasn’t fully realized until his 60s when he finally raced two seasons as part of the DIRTcar racing series at Oakshade Raceway. His love for the open road brought him to purchase a Harley-Davidson, and after he retired in 2016, he took full advantage of any nice weather Michigan offered, no matter the season. His saying was “If the pavement is dry, we ride” and he and Cindy could be found proving the maxim “All roads lead to ice cream” any month of the year. When he wasn’t out cruising, he was sure to be at home working in the yard and spoiling the grandchildren. As a big kid himself, he was perfectly situated to be the kind of Papa that any grandchild wants. Whether he was giving motorcycle rides, building epic blanket forts, or engaging in endless amounts of tickle warfare, he would always find the energy for “just one more”. His tireless enthusiasm extended beyond his immediate family, and he was always available to help anyone in need, whether lifelong friend or new acquaintance. His gift of gab ensured that he would make new friends wherever he went, and his big heart and selfless service would guarantee that he would keep them. He will forever be remembered for his booming voice, his signature sayings, and his willingness to lend a hand whenever it was required. Jim and Cindy are survived by their two children, Matthew (Angelique) West and Jamie (Blair Hornbeck) West, both of Monroe, and five grandchildren: Blade West, Savannah West, Dominick Cormier, Quinn West, and Kira Cormier. Additional survivors of Jim include three siblings, William (Fiana) West of Monroe, Irene Ann (Fred) Voss of Monroe, and Karen Marie Balent of Temperance. Jim was preceded in death by his parents; five brothers, Thomas, Carl, Clifford, Charlie, and Kenneth West; and stillborn sister, Catherine. Cindy is also survived by three siblings, Conrad (Joni) Ausmus of Temperance, Ross (Janet) Ausmus of Erie, and Annette (Tom) Burger of Greenville, SC. Cindy too was preceded in death by her parents. Family and friends may visit from 1 p.m. to 8 p.m. Friday at Bacarella Funeral Home where a Scripture Service will be held at 5 p.m. Jim and Cindy will lie in state together at 10 a.m. Saturday at St. John The Baptist Catholic Church. Mass of the Resurrection will be celebrated at 11 a.m. by Rev. Fr. David Burgard (Cindy’s cousin) followed by burial at St. Joseph Cemetery in Erie. Memorial donations are suggested to St. John Catholic Church or American Red Cross of which Cindy was an avid blood donor.

James R. and Cynthia S. West of Monroe, passed away Thursday, December 26, 2019 due to injuries they sustained when they were struck while riding their motorcycle in Britton, MI. Both born in Monroe, Jim was the son of Herbert and Evelyn... View Obituary & Service Information

The family of James and Cynthia West created this Life Tributes page to make it easy to share your memories.

Send flowers to the West family.