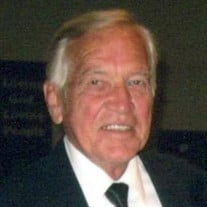 J.S. “Jay” Loveday, age 85 of Albion, MI, formerly of Monroe, passed away Monday evening, May 17, 2021, at McLaren Greater Hospital in Lansing. Born August 22, 1935 in Clairfield, TN, Jay was the son of the late Tracy and Ada (Rice) Loveday. He served his country in the U.S. Marine Corp in the 1950’s during the Korean War before going to work as a skilled tradesman for Ford Motor Company in Livonia. As a Cutter Grinder, his long career spanned 46 years. After retiring, Jay moved to Albion, MI where he made his home for the past 16 years. While residing in Monroe, Jay was an active member of Monroe Apostolic Church. He was currently a member of Christ Apostolic Church in Albion where he served as an usher. Jay was very much an outdoorsman who enjoyed hunting, fishing, and making hunting knives. They were never made for sale, however it is estimated that he made and gave away over 200 knives to family and friends. Jay is survived by his wife, Ronda M. (Burt) Loveday; two sons, Timothy Loveday of Newport and Ricky (Cheryl) Loveday of Monroe; a sister, Reba (Ralph) Meyers of Dearborn Heights; 3 grandchildren, Lesa (Aldo) Perna, Katie Loveday, and Holly Loveday; 4 great-grandchildren, Bianca & Laila Perna, and Ashton & Greyson Davis. In addition to his parents, Jay was also preceded in death by two brothers, Elmer “Ken” Loveday and Stanley Loveday, and a sister, Harriette “Marie” Daniel. Family and friends may visit from 11 a.m. until time of service at 2 p.m. Tuesday, May 25th, at Bacarella Funeral Home. Pastor Bruce Leaman, formerly of Gracepoint (Monroe Apostolic) Church will officiate followed by burial at Roselawn Memorial Park, LaSalle. For anyone wanting to make a donation in memory of Jay, donors are encouraged to support the building fund of Christ Apostolic Church in Albion in lieu of flowers.

The family of J.S. "Jay" Loveday created this Life Tributes page to make it easy to share your memories.

Send flowers to the Loveday family.