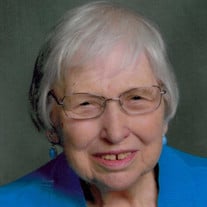 Ina Irene Bogi, 88 years, of Monroe, Michigan, went home to be with the Lord on Sunday, September 19, 2021. Born August 18, 1933 in Bedford Township, Michigan, Irene was the daughter of the late Arthur E. and Ina (Bird) Wain. On August 11, 1951, Irene married her beloved husband, John P. Bogi, Sr., at Maybee Congregational Church. Sadly, he preceded her in death on October 1, 2019 after 68 years of marriage. Irene worked for 20 years as a Print Operator for the University of Michigan, from which she retired in 1989. While working, she also attended classes at the University of Michigan and in 1976 received her high school diploma. Irene was a long-time member of Maybee Congregational Church and was a current member of Monroe Missionary Baptist Church. She was also a member of Raisinville Grange. She enjoyed traveling and all sorts of crafts, specifically, personalized greeting cards, family albums and country crafts. Most of all Irene enjoyed time spent with family. She is survived by four loving children: J. Paul (Milica) Bogi, Jr. of Ann Arbor, Brenda K. (Mark) Fetterly of Monroe, James A. (Tina) Bogi of Monroe, and Brian L. Bogi of Maybee, 11 cherished grandchildren, 13 treasured great grandchildren and a sister, Betty J. Bodine of Maybee. In addition to her husband and parents, Irene was preceded in death by a daughter, Debra S. Bogi on May 3, 2009. Visitation will be held on Wednesday from 2-8 pm at Bacarella Funeral Home, 1201 S. Telegraph Rd., Monroe, MI, 48161, where funeral services celebrating Irene’s life will be held on Thursday, September 23, 2021 at 11:00 am. Rev. Roy Southerland will officiate. Interment will be held at Northside Cemetery in Maybee. Memorial contributions are suggested to Monroe Missionary Baptist Church.

Ina Irene Bogi, 88 years, of Monroe, Michigan, went home to be with the Lord on Sunday, September 19, 2021. Born August 18, 1933 in Bedford Township, Michigan, Irene was the daughter of the late Arthur E. and Ina (Bird) Wain. On August... View Obituary & Service Information

The family of Ina I. "Irene" Bogi created this Life Tributes page to make it easy to share your memories.

Send flowers to the Bogi family.