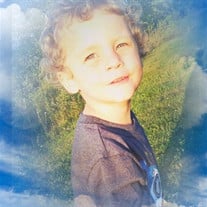 Hunter Ray Gullette, age 3, of Toledo, Ohio, passed away unexpectedly at 12:12 PM on December 7, 2019 at his home. Born November 19, 2016 in Toledo, he was the son of Alyssa L. Glisson and Kevin Ray Gullette. Hunter was a bright and beautiful young boy who loved everyone. He was energetic, often climbing on things and jumping off them, even though his parents tried to stop him. Even doing flips and kicks off the couch; to say he was fearless would be an understatement. Hunter’s favorite food was broccoli, so much so that he would even turn down pancakes, choosing broccoli instead. His favorite song was “Baby Shark” and could often be heard singing it as he and his brothers played together. He loved fishing with his stepdad and brothers, as well as spending time at the beach, playing in the sand and collecting seashells. His favorite thing to do was play with his brothers, whether it was playing at the park, riding his four-wheeler or wrestling, they always had fun together. As all children do, Hunter loved getting into things just to see what your reaction would be and would often remind those who tried to scold him that he was their baby, which most often got him out of any trouble he may have been in. Hunter was strong, and fun-loving; he will forever be missed by those who knew and loved him. To cherish his memory, he leaves his parents, Alyssa and Kevin; step- parents, Joshua Copus and Victoria Gullette; five siblings: Jayden Prokop and Dominick David, Bentley Ray, Autumn Rayne and Raeann Rose Gullette; maternal grandmother, Brandi Dushane; paternal grandmother, Ann Gullette; maternal great-grandmother, Terri Dushane; paternal great-grandmothers, Linda Gullette and Pansy Emerson; four aunts: Kelcey Chapman, Lorryn Wright, Hope Franjesh and Angela Gullette; three uncles, Samuel Wright, Ray Gullette and Brian Hall; and close family friend, Coty Mullen, He was preceded in death by his maternal grandfather, William Glisson; paternal grandfather, Claude Priddy; paternal great-grandfather, Chester Gullette and aunt, Samantha Gullette. Visitation will be held from 12 noon until services celebrating his life begin at 2 PM on Wednesday, December 18, 2019, at Bacarella Funeral Home, 1201 South Telegraph Road, Monroe, MI, 48161. Rev. Roy Southerland will officiate. A private interment will be held at Roselawn Memorial Park, LaSalle. Memorials contributions in Hunter’s memory are suggested to the family. Online condolences and special memories may be shared with the family by visiting the obituary page at www.bacarellafuneralhome.com.

Hunter Ray Gullette, age 3, of Toledo, Ohio, passed away unexpectedly at 12:12 PM on December 7, 2019 at his home. Born November 19, 2016 in Toledo, he was the son of Alyssa L. Glisson and Kevin Ray Gullette. Hunter was a bright and beautiful... View Obituary & Service Information

The family of Hunter Ray Gullette created this Life Tributes page to make it easy to share your memories.

Send flowers to the Gullette family.