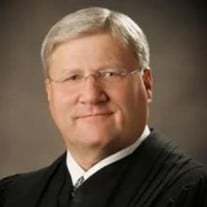 38th Judicial Circuit Court Judge Michael A. Weipert, of one of the longtime families in Monroe County’s legal community, died Thursday at his home, under hospice care, with his family and his friends at his side. The second youngest of 8 siblings born to Victor H. & Aurelia M. (Steiner) Weipert in Monroe, Michael (Mike) Allen passed away on March 3, 2022 at the age of 65 after a courageous battle with liver cancer. He was a very private individual and had not let many people know about his condition because he was determined to beat it. He married the love of his life, Joyce (Braden-Pierce), on December 16, 1989. Together they raised Joyce’s daughter Kellie Osborne and have two grandchildren Dylan Michael Osborne and Sydney Mae Stefko. A devoted husband, Michael cared for his infirmed wife, Joyce, at home for many years before her death on March 14, 2021. He attended St. Michael the Archangel grade school in Monroe, graduated from Monroe Catholic Central ‘74 and received his Associates Degree from the illustrious Monroe County Community College ‘76 and earned a BA from the University of Michigan Ann Arbor ‘78, and a Juris Doctorate from Detroit College of Law ‘83. He practiced law with his father Victor H. Weipert, Sr. for 10 years until his father’s death and chose to stay in the Monroe Community to now head the family law firm. He then went on to serve as Monroe County Prosecutor from 2000 to 2004. In 2004 he was elected to the Monroe County Circuit Court where he served for 17 years–using the same “seat and bench” where his Uncle the Honorable Judge William J. Weipert, Jr. once presided. He was dedicated to the community of Monroe, serving and supporting numerous organizations, seated on many boards and other capacities through the years. Among them are Holiday Camp, Kiwanis, serving as secretary for more than 30 years, St. Mary Catholic Central, the Monroe Club, the Port of Monroe just to name a few. He often was asked to preside over various ceremonies and was a consummate toastmaster. A percussionist since high school days, where he received the John Phillip Sousa award, he continued to use his God given talent to serve the Lord by tapping those drums with the choir at St. Mary’s Church, where he was a member. Michael was a prominent spectator along the Monroe County Fair parade route each year passing out his Kiwanis peanuts. He was also an ardent supporter of Monroe County 4-H and a successful bidder in the Monroe County Fair small animal auction. He was an avid bowler, loved animals and enjoyed spending time on his farm. Michael is survived by his step-daughter and grandchildren; brother Victor H. (Elaine) Weipert, Jr. of E. Lansing; sisters, Kathleen A. Weipert of Monroe, Mary A. Weipert of LaSalle, Debra A. Weipert of Monroe and Michele A. (David) Weipert-Winter of Ann Arbor; and brother-in-law Marvin E. Hoffman of Kalamazoo; nine nieces and nephews and numerous great nieces and nephews; and two great-great nephews; dearest friends Billy and Dorothy Costello of Monroe of whom he was godfather to their son Jake; Lou Maurice and Barbara A. Hyden. In addition to his beloved wife Joyce, Michael was preceded in death by his parents, infant brother William David Weipert, and oldest sister Louise A. (Marvin) Hoffman of Kalamazoo. In accordance with Michael’s wishes there will be no visitation, a memorial Mass will be held at 11 a.m. Saturday, March 12, 2022 at St. Mary Church 127 N. Monroe St., Monroe, the family will receive guests starting at 10 a.m. Private interment will take place at a later date. In lieu of flowers, the family suggest memorial donations be made to Holiday Camp, The Aurelia M. & Victor H. Weipert, Sr. Orchestral and Band Endowment Fund at St. Mary Catholic Central High School, Monroe County Community College or to a charity of the donor’s choice.

38th Judicial Circuit Court Judge Michael A. Weipert, of one of the longtime families in Monroe County&#8217;s legal community, died Thursday at his home, under hospice care, with his family and his friends at his side. The second youngest... View Obituary & Service Information

The family of Honorable Michael A. Weipert created this Life Tributes page to make it easy to share your memories.

38th Judicial Circuit Court Judge Michael A. Weipert, of one...

Send flowers to the Weipert family.