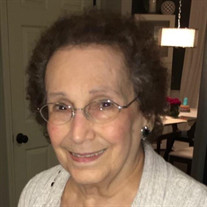 Helen Marie Betrus Smith, 96 years young, of Monroe, Michigan, passed away on Saturday, March 5, 2022 after a short illness. Marie was born on March 1, 1926 to Fred and Sadie (Hatem) Betrus who immigrated from Zahle, Lebanon. The family owned and operated Betrus Market on the corner of Monroe and Lorain streets. They were part of a small group of Lebanese immigrants who settled in the city of Monroe in the early 1900’s and opened various retail and wholesale businesses. Marie was a proud 1943 graduate of St. Mary Academy and attended Alumni Day regularly over the years, keeping in touch with many of her classmates and IHM nuns. Following high school, she went to work as an Executive Assistant at Monroe Auto Equipment. She also worked at the family business, which is where she met William D. Smith after seeing him in a Monroe High School play. She waited for him to return from his service in the Coast Guard during WW II and on December 27, 1947 she and Bill were married in St. Mary Catholic Church in Monroe. Bill and Marie moved to New York City following their marriage so Bill could pursue his acting career. They later moved back home to Monroe to raise their family. Bill worked in the business his parents started, Smith Agency of Monroe, on Monroe street, and was later joined in the office by his son Mark D. Smith who was also a long time Monroe attorney. Marie and Bill shared two passions, family and Monroe Community Players (MCP). Monroe Community Players had lapsed during the war years. Marie and Bill, along with friends and family, revitalized the group after moving back to Monroe. Marie worked as House Manager for hundreds of shows over the years and remained active in MCP even during COVID when meetings were conducted through Zoom. She was an avid and vocal supporter of the arts in Monroe and was so proud of Monroe residents who made acting their passion and livelihood. She was extremely proud of her son Paul W. Smith, who made his career in broadcasting. “Sweet Marie” made multiple appearances on his show on WJR and she loved to attend his live broadcasts, especially the St. Patrick’s Day broadcast. Marie had friends and family all over the world that she kept in touch with through social media. If Marie met you once she considered you a friend for life. Marie will be lovingly remembered by her son Paul W. Smith (Kim), daughter Alison Smith Avendt (Dan Schwanke), daughter in law Bernie Abbate Smith, grandchildren Dr. Jessica Burns (Scott), Elyse Schwanke, Katelyn Welever (Brandon), Lauren Davison (Nick), Benjamin Schwanke, Jack Avendt (Abby), Adam Smith, Jamie and Natalie Guisinger, Sophie Smith and beloved great-grandchildren Vivienne, Ethan, Charlotte, Brooks, Smith, Aubrey, Eli and Sadie. She will also be missed by her brother Peter J. Betrus and numerous nieces, nephews and cousins. Marie has been reunited with her family who proceeded her in death, husband William D. Smith, infant son Brian Andrew Smith, son Mark D. Smith, her parents and sisters Lillian Betrus and Sally Vanderpool. The Smith family would like to thank the staff at Ebeid Hospice in Sylvania, Ohio for their loving care of Marie in the last week of her life. Visitation will be held on Thursday from 3-8 pm at Bacarella Funeral Home, 1201 S. Telegraph Rd., Monroe, MI, 48161, where a time of sharing will be held at 7:00 pm. On Friday, March 11, 2022, she will lie in state at St. Mary Catholic Church, 127 N. Monroe St., Monroe, MI, 48162 from 10:00 am where Mass of the Resurrection celebrating Marie’s life will begin at 11:00 am. Fr. Kishore Battu will officiate. Marie will be interred next to her husband at St. Joseph Cemetery in Monroe in a private family service. In lieu of flowers, Marie and her family would be honored if you made a memorial donation to the Community Foundation of Monroe County to benefit the William D. and H. Marie Betrus Smith Scholarship Fund for the Theatrical Arts.

The family of Helen Marie Smith created this Life Tributes page to make it easy to share your memories.

Send flowers to the Smith family.