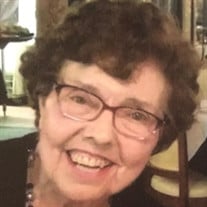 Helen M. Gaynier, age 91 of Newport, Michigan, passed away peacefully at 2:18 AM Saturday, April 18, 2020 with her children at her side at Arbor Hospice in Saline, Michigan. Born September 7, 1928 in South Rockwood, Michigan. Helen was the daughter of the late Chauncey and Hazel (Chinavare) Roberts. She married Mose J. Gaynier on August 1, 1959 at St. Mary Catholic Church in Rockwood. Sadly, he preceded Helen in death on April 12, 2003. Helen was a 1945 graduate of South Rockwood High School. She earned a Bachelor of Arts in education from Michigan State Normal College (Eastern Michigan University) and a Master of Arts in education from the University of Michigan. As a life-long teacher, Helen taught in the Atherton School District in Flint, Michigan, Boyd Elementary School in the Monroe Public School system, and retired in 1989 from the Airport School District. She taught second grade at Niedermeier Elementary School for nearly 3 decades. This legacy as an educator gave her the opportunity to teach multiple generations of students. A teacher at heart, after her retirement, she also volunteered her time to help teach adults to read. For personal enjoyment, she loved to read and liked the challenge of solving crossword puzzles and Sudoku. She found great joy in the flowers she planted and watered in her yard. In late May each year, she looked forward to going with her daughter Lynne to several greenhouses to load up the cars with flowers. Then on Memorial weekend, her children and grandchildren would join her for a day to help plant/landscape and enjoy a meal together. Helen was a member of St. Charles Borromeo Catholic Church in Newport where she was a member of the Altar Society and school board. Her Catholic faith was an integral part of her life. For many years, she devoted an hour each week to attend eucharistic adoration. She frequently prayed the rosary, dedicating portions of the rosary prayers to each of her children and grandchildren. Helen was a loving mother and grandmother, “Mimi.” She was truly proud of her children and grandchildren. She loved to spoil them. Many gatherings of family and friends took place in her home on Niedermeier Street. She loved to gather her children and grandchildren together for special occasions and holidays. She was well known for her chicken noodle soup, cabbage and cheese casserole and baked goods. Helen’s peach, pecan and meringue pies were favorites of her family and friends, as were her “Mimi’s” brownies. She also generously shared food with others who might be experiencing a difficult time. Helen treasured her time with her siblings and nieces/nephews from the Roberts’ and Gaynier families. She looked forward to her frequent lunch gatherings with her sisters, and the Roberts and Gaynier family reunions. Helen also enjoyed annual get-togethers with her college roommates and their families. She had fond memories of family vacations, long weekend getaways with her children/grandchildren, and trips with other friends. Following her husband Mose’s death, Helen lived in their home independently for 15 years. She felt blessed with the great neighbors/friends she had for several decades on Niedermeier Street. She appreciated how they helped to look after her. In January 2018, she moved to Atria Kinghaven (a senior apartment community) in Riverview. She formed many new friendships among the residents and staff. Helen looked forward to the social interaction of mealtimes in the dining room and attending game nights where she was known for her sharp skills in “Word in a Word.” Helen’s grandchildren will always remember her exceptional vocabulary and competitive spirit in the game Scrabble. Helen kept a positive attitude even when faced with health challenges in her later years. She always bounced back. She was truly an inspiration to anyone she met. Helen is survived by three children: John (Nina) Gaynier of Carleton, Lynne (Stan) Fogle of Monroe, and Fred (Carina) Gaynier of Livonia; four sisters: Ada Reaume of Newport, Donna Granger of Trenton, Mary (Frank) Stasa of Carleton, and Betty (Dennis) Beste of Carleton; two brothers: Duane (Margaret) Roberts of Royal Oak and Thomas (Sharon) Roberts of Milan; seven grandchildren: Anthony Gaynier, Mitchell Gaynier, David Gaynier, Hannah Gaynier, Madeline Fogle, Benjamin Gaynier, and Andrew Fogle; and sister-in-law, Evelyn Roberts of Newport. In addition to her parents and husband, Helen was also preceded in death by a brother, Robert Roberts and two brothers-in-law, Alvie Reaume and George Granger. Due to current social gathering restrictions, visitation was privately attended by family at Bacarella Funeral Home followed by burial at St. Charles Cemetery. A Memorial Mass of the Resurrection will be scheduled at a later date to celebrate Helen’s life. Memorial donations are suggested to St. Charles Parish in Newport, St. Mary Catholic Central (SMCC) High School in Monroe, or Heartbeat of Monroe. Online condolences and special memories may be shared with the family by visiting the obituary page at www.bacarellafuneralhome.com.

Helen M. Gaynier, age 91 of Newport, Michigan, passed away peacefully at 2:18 AM Saturday, April 18, 2020 with her children at her side at Arbor Hospice in Saline, Michigan. Born September 7, 1928 in South Rockwood, Michigan. Helen was the... View Obituary & Service Information

The family of Helen M. Gaynier created this Life Tributes page to make it easy to share your memories.

Send flowers to the Gaynier family.