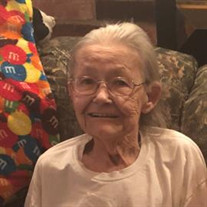 Harrietta K. “Kinney” Coutcher, age 77, of Monroe, passed away peacefully with her family by her side at 4:21 a.m. Thursday, January 9, 2020, at her home. Born March 19, 1942 in Detroit, Michigan, she was the daughter of the late Elmer and Hazel C. (Hall) Schmidt. She attended school in Granite City, Illinois, where she met her beloved husband, Charles Coutcher; the two were married on September 6, 1962. Sadly, he preceded her in death on May 14, 1989. Soon after their marriage, she and her husband moved to Monroe to raise their family. In addition to being a homemaker, Kinney worked as a greeter at Wal-Mart for many years, retiring in 2009. She enjoyed watching crime related television shows, such as CSI and NCIS, cuddling with her dogs and cats and most of all, spending time with her family, especially her grandchildren and great-grandchildren. To cherish her memory, Kinney leaves two children, Kevin B. (Connie) Coutcher of Monroe and Melinda (Bill) Alexander of Yuma, Arizona; eleven grandchildren: Ken (Hauhani) Nelson, Kevin (Megan) Coutcher Junior, Ashley (Sean) Tompson, Kurtis (Marisa) Nelson, Kane Nelson, Michael (Cristey) Parriet, Justin (Ashly) Coutcher, Bailey Alexander, Scoti Alexander, Melanie Coutcher and Angel Robinson; and thirteen great-grandchildren: Liam, Alexander, Evelyn, Misty, Phillip, Logan, Jenna, Bentley, Wyatt, Madalynn, William, Tavin, and Noelani. In addition to her parents and husband, Kinney was preceded in death by one son, Charles E. Coutcher. In accordance with her wishes, cremation has taken place and no services are scheduled at this time. Memorial contributions in Kinney’s memory are suggested to the organization of the donor’s choice. Online condolences and special memories may be shared with the family by visiting the obituary page at www.bacarella funeralhome.com.

The family of Harrietta Kendolyn "Kinney" Coutcher created this Life Tributes page to make it easy to share your memories.

Send flowers to the Coutcher family.