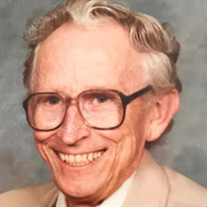 Harold Lewis Kinner of Monroe, MI passed away at Fountain View of Monroe on Thursday, April 15, 2021 at the age of 92. Born February 4, 1929 in Coshocton, OH, he was the son of the late James E. and Frances (Hathaway) Kinner. He grew up in the village of Plainfield, OH and graduated from Plainfield High School in 1947. He then attended Kent State University, from which he earned a bachelor’s degree in Industrial Arts Education. Mr. Kinner taught school in Ohio for several years at the Nellie, Union, and Fresno Schools, all in Coshocton County. He later earned a master’s degree in Education from the University of Toledo. On August 24, 1952, he married Mary Lou Kuenzli of Upper Sandusky, Ohio. They moved to Monroe, Michigan in 1954 and were married for over 68 years. Mr. Kinner was an Industrial Arts teacher and Driver Training instructor at Monroe Jefferson High School. He also was a referee for high school basketball games. In the early 1960s, Mr. Kinner was instrumental in the formation and organization of the first teachers’ unions in the state of Michigan. During the summers from 1971 through 1981, he was the manager-operator of Sterling State Park Concessions. He retired from Monroe Jefferson in 1987 after a teaching career of over 35 years. After his retirement, Mr. Kinner enjoyed golfing, bee-keeping, writing short stories about his youth, and working on family genealogy records. He also volunteered as a delivery driver for Meals On Wheels, and was a long standing member of the Monroe First United Methodist Church. Mr. Kinner is survived by his wife, Mary Lou, daughter Sally (Dennis) Poore of Monroe, son Jim (Mindy) Kinner of Holland, MI, and daughter Sara (Mike) Gaynor of New Boston, MI. He is also survived by grandsons Andrew (Daniella) Poore and Charles Poore; granddaughters Bethany Kinner and Shannon (Tyler) Zoerhof; granddaughter Julia Gaynor; and great-grandsons James and Leo Zoerhof. Private services will be held at Bacarella Funeral Home 1201 South Telegraph Road, Monroe, MI 48161. Burial will be at Plainfield Cemetery in Plainfield, OH. Memorial contributions are suggested to First United Methodist Church of Monroe or to the Salvation Army. The family wishes to thank the staff at both Fountain View of Monroe and Monroe ProMedica Hospice for their kind and caring support.

Harold Lewis Kinner of Monroe, MI passed away at Fountain View of Monroe on Thursday, April 15, 2021 at the age of 92. Born February 4, 1929 in Coshocton, OH, he was the son of the late James E. and Frances (Hathaway) Kinner. He grew up... View Obituary & Service Information

The family of Harold L. Kinner created this Life Tributes page to make it easy to share your memories.

Send flowers to the Kinner family.