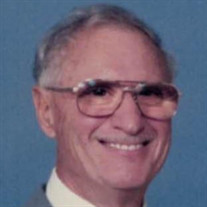 Guido R. “Dick” Julian, 95 years, a lifelong resident of Monroe, Michigan, went home to be with the Lord on Sunday, March 7, 2021 at the home of his son, Keith Julian and under the care of ProMedica Hospice. Born April 26, 1925 in Monroe, Guido was the son of the late Armand and Louise (Cannoe) Julian. He attended Monroe Public Schools and was a 1943 graduate of Monroe High School. Guido served his country honorably and proudly as a Seaman First Class in the United States Navy during WWII. He served from July 1943 to March 1946 in the Asiatic Pacific Theatre. He was awarded the Asiatic Pacific Medal and the WWII Victory Medal. On April 26, 1947, Guido married his beloved wife, the former Mary L. Weaver in Monroe. Sadly, she preceded him in death on November 29, 2012 after 65 years of marriage. Guido worked as a machinist at River Raisin Paper Company from 1946 to 1965. He then went to work at Ford Motor Company’s Woodhaven Stamping Plant, from which he retired in October of 1987. Guido was a life member of VFW Post 1138. He enjoyed golf, bowling, oil painting, dancing, playing cards, traveling, and watching sports on television. Most of all Guido enjoyed time spent with family. Guido is survived by three loving children: Keith (Shari) Julian of Monroe, Howard (Vickie) Venier of Newport, and Fiana (William) West of Monroe, six cherished grandchildren, 13 treasured great grandchildren, four precious great great grandchildren, and a sister Dolly DeSmet of Monroe. In addition to his wife and parents, Guido was preceded in death by his brother; Vince and a sister; Mae Serbin. Visitation will be held on Sunday, March 14, 2021 at Bacarella Funeral Home, 1201 S. Telegraph Rd., Monroe, Michigan, 48161 from 2:00 – 6:00 pm. Due to the COVID19 Pandemic, funeral services will be private and under the auspices of VFW Post 1138. Memorial contributions are suggested to The Humane Society of Monroe County or ProMedica Hospice of Monroe.

The family of Guido R. "Dick" Julian created this Life Tributes page to make it easy to share your memories.

Send flowers to the Julian family.