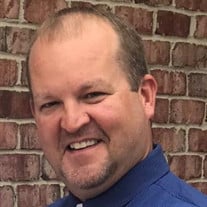 Gregory L. Hall, age 45, of LaSalle, passed away unexpectedly on Saturday, January 4, 2020, at ProMedica Toledo Hospital. Born January 8, 1974 in Monroe, he was the son of Gary L. and the late Carolyn A (Hoste) Hall. Greg attended Monroe High School, graduating with the class of 1992 and earned an associate degree from Monroe County Community College. He married Loretta “Lory” L. Hurt on October 31, 1998 at Grace Lutheran Church, Monroe; from this union would come one son, Trenton G. Hall. Greg worked for Worthington Industries as an Outside Sales Representative for more than twenty years. Greg excelled at baseball during high school, after he continued playing softball in many local leagues and tournaments statewide. Greg cherished time spent with his son, whether it be coaching or just hanging out with him, the two were inseparable. He and his son were very close, often referring to him as his best friend and felt as though his world revolved around him. He was one of the original founding members of Monroe Titans Youth Baseball Organization and continued assisting the organization long after his son moved on to other organizations. Greg also coached many baseball teams throughout the area. He was very proud to have assisted in merging of the Level Up – Monroe Titans Youth Baseball Organization, where children and young adults can participate in sports and strength conditioning. Greg was an ardent University of Michigan Football and Basketball fan, so much so that he could tell you any up and coming recruits that may have been looked at for the teams. He was also a dedicated Steelers football and Tigers Baseball fan. While Greg loved watching professional and collegiate sports, they were no substitute for attending his own son’s baseball games. You would often run into him as he and Lory spent many Friday night, “date nights,” in the stands at area high schools rooting on his nieces and nephews. Greg spent a lot of time outdoors, camping with friends and sparking friendly cooking competitions on his smoker. To cherish his memory, Greg leaves his loving wife of twenty-two years, Lory; one son, Trenton; his father, Gary; two siblings, Steve W. and Jonena A. Hall both of Monroe; in-laws, Rick and Julie “Lola” Luft; and many nieces and nephews. In addition to his mother, Carolyn, he was preceded in death by his grandparents. Visitation will be held from 2 p.m. until 7 p.m. Thursday, January 9, 2020, (Which the family encourages all to wear their Michigan gear.) at Bacarella Funeral Home, 1201 S. Telegraph Road, Monroe, MI, 48161, where services celebrating his life will be held on Friday, January 10, 2020, beginning at 11 a.m. Mike Marchese will officiate. Interment will follow at LaSalle Cemetery. Memorial contributions in Greg’s memory are suggested to help benefit Trenton’s continued love of playing baseball. Please make contributions payable to his mother, Loretta. Online condolences and special memories may be shared with the family by visiting the obituary page at www.bacarellafuneralhome.com.

The family of Gregory L. Hall created this Life Tributes page to make it easy to share your memories.

Send flowers to the Hall family.