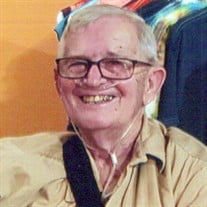 Gerald D. “Bud” Stanifer, age 80, of Dundee, passed away Sunday, February 27, 2022 at Hospice of Northwest Ohio, Toledo. Bud was born May 4, 1941 in Monroe. He was the son of Leonard and Helen (Zimmerman) Stanifer. He married Paulette R. Covert August 27, 1960; she preceded him in death March 13, 2017. He was a truck driver for Jones Transfer until they closed and continued to drive until his retirement in 2000. Bud was a private pilot and enjoyed flying, traveling, camping and spending time with his family. He is survived by his three children, David (Paula) Stanifer of New Boston, Dan (Maria) Stanifer of Monroe and Sherrie (Chris) Simon of Dundee; three siblings, Norma (Jack) Linquist of Monroe, Bill (Sharon) Stanifer of Flat Rock and Mary Urbanick of Wyandotte; eight grandchildren, Alicia, Joseph, Brandon, Nathan, Olivia, Nicole, Jacob and Kelsey and seven great grandchildren. In addition to his wife, he is preceded in death by his parents, a granddaughter, Bianca Stanifer and a brother, Blaine Stanifer. Visitation will be Wednesday, March 2, 2022 from 2 to 8 p.m. at Bacarella Funeral Home 1201 S. Telegraph Rd., Monroe, where services will be held at 11 a.m. Thursday. Rev. Roy Southerland will officiate. Burial will follow at Roselawn Memorial Park, LaSalle. Memorial Contributions are suggested to Gabby’s Ladder.

The family of Gerald D. "Bud" Stanifer created this Life Tributes page to make it easy to share your memories.

Send flowers to the Stanifer family.