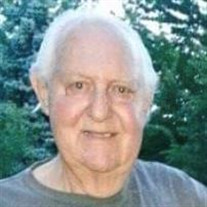 Gerald R. “Jerry” Polland Sr., age 80, of Monroe, passed away Friday, November 6, 2020 at ProMedica Monroe Skilled Nursing and Rehab, with his daughter at his side. Jerry was born August 26, 1940 in Monroe, he was the son of Leo and Alma (Navarre) Polland. He married Carolyn Jubenville September 9, 1961; she preceded him in death in 2006. He was a 1958 graduate of Monroe Catholic Central High School and a former member of St. Mary Church. Jerry worked for General Motors at the Fisher Body Plant before his retirement. After retiring, he wanted to stay busy and he began transporting cars for both Friendly Ford and Monroe Dodge. When his children were young, he enjoyed coaching their baseball and softball teams. He enjoyed listening and watching Detroit baseball games. After his wife’s death he would to go to church dinners, where he enjoyed both the food and the company he found there. Jerry is survived by his daughter, Sherry Steinman of Monroe; sister, Ruth Braden of Monroe; four grandchildren, Sami Steinman, Noah Steinman, Christanna LaPalm and Sommer Polland and special friend Carmella Masserant. He is preceded in death by his parents, his wife, a son, Gerald R. Polland, Jr.; three brothers and two sisters. Family and friends may call from 2 to 8 p.m. Monday November 9, 2020 at Bacarella Funeral Home 1201 S. Telegraph Road, Monroe, MI. In accordance with Jerry’s wishes cremation will follow. Memorial contributions are suggested to Monroe County Animal Control. Online condolences and special memories may be shared with the family by visiting the obituary page at www.bacarellafuneralhome.com

The family of Gerald R. Polland Sr. created this Life Tributes page to make it easy to share your memories.

Send flowers to the Polland family.