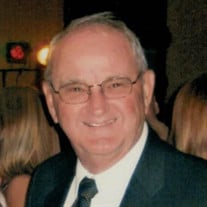 George Ronald Maxwell, age 85, passed away peacefully on Thursday, July 8th, six months after the passing of his beloved wife of over 64 years, Catherine (Kit) Maxwell. His sons were at his side. George was born on July 11, 1935 in Carleton,... View Obituary & Service Information

The family of George R. Maxwell created this Life Tributes page to make it easy to share your memories.

Send flowers to the Maxwell family.