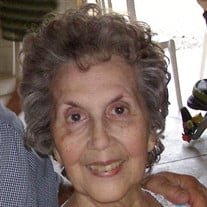 Genevieve Mary Czupich, 86, of Temperance, went home to be with the Lord at 2:07 AM on Tuesday, December 10, 2019 at Fountainview of Monroe. She had been in declining health for three months. Born July 14, 1933 in Monroe, she was the daughter of the late Louis and Hazel (Lemerand) Navarre. Genevieve attended Monroe High School, graduating with the class of 1952 and was a former member of St. Joseph Catholic Church, Monroe. She married her husband, Edward Czupich Sr. August 3, 1957 in Angola, Indiana. Sadly, after twenty-four years of marriage, he preceded her in death on December 14, 1981. Genevieve spent most of her working life as a homemaker, also working for Monroe Evening News and Valmassei’s. She enjoyed working in her flowers, caring for others, bird watching and, in her younger years, going tent camping with her children and husband. Genevieve loved her family deeply and looked forward to making holiday meals so everyone could be together. To cherish her memory, Genevieve leaves two sons, Edward (Kelly) Czupich of Monroe and Kenneth Czupich of Winona, Texas; five grandchildren: Holly (Andy) Burghardt, Jonathan (Valarie) Czupich, Amy (Michael) Hinkle, Matthew Czupich and Stephanie Czupich; and eleven great-grandchildren. In addition to her parents and husband, she was preceded in death by her sister, Rita Aguina, and brother, Howard Navarre. Visitation will be held on Monday, December 16, 2019, from 1 PM until 7 PM at Bacarella Funeral Home, 1201 S. Telegraph Road, Monroe, MI, where services celebrating her life will begin at 11 AM on Tuesday, December 17, 2019. Rev Roy Southerland will officiate. She will be laid to rest next to her beloved husband at Roselawn Memorial Park, LaSalle, immediately following services. In lieu of flowers, memorial contributions in Genevieve’s memory are suggested to the Humane Society of Monroe County. The family would like to express very special, heartfelt thank you to the caregivers and staff of Fountainview of Monroe for the tireless care they provided to Genevieve over the past five years. Online condolences and special memories may be shared with the family by visiting the obituary page at www.bacarellafuneralhome.com.

Genevieve Mary Czupich, 86, of Temperance, went home to be with the Lord at 2:07 AM on Tuesday, December 10, 2019 at Fountainview of Monroe. She had been in declining health for three months. Born July 14, 1933 in Monroe, she was the daughter... View Obituary & Service Information

The family of Genevieve Mary Czupich created this Life Tributes page to make it easy to share your memories.

Genevieve Mary Czupich, 86, of Temperance, went home to be with...

Send flowers to the Czupich family.