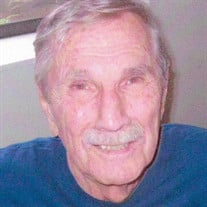 Gene Palmer Au, age 82, of Monroe, went home to be with the Lord, surrounded by his loving family on Wednesday, March 11, 2020, at Wellspring Lutheran Services. Born November 19, 1937, he was the son of the late Hilda Geiman Au Betker and Palmer F. Au and his late stepfather, Henry Betker. Gene attended Airport High School, graduating with the class of 1956. He married his beloved wife Mary A. Terrasi on August 20, 1960 at Holy Ghost Lutheran Church, Monroe. Gene served his country honorably in the United States Army, spending most of his enlisted time in Okinawa, Japan. Upon his return he began working for General Motors Powertrain, Toledo, for thirty-three years, retiring in 1992. Gene enjoyed his cabin up north that he built with his friends and family, gardening, hunting, fishing, bowling, sunbathing and spending time with everyone. He was blessed to have so many friendships that have lasted his entire life. To cherish his memory, Gene leaves his wife of sixty years, Mary; three daughters: Sherry Sutherland of Linden, California, Shelly Trisler of San Marco’s, California and Sandy Mathis of Lake Zurich, Illinois; one sister, Betty (Thomas) Younglove of Monroe; five grandchildren: Morgan Trisler, Shannon Trisler, Emily Blackburn, Sydney Mathis and Luke Mathis; and one great-grandchild. He is also survived by many nieces and nephews. He was preceded in death by his parents and stepfather. Memorial contributions in Gene’s memory are suggested to Holy Ghost Lutheran Church. Visitation will be held from 2 p.m. until 8 p.m. Sunday, March 15, 2020, at Bacarella Funeral Home, 1201 S. Telegraph Road, Monroe, MI, 48161. He will lie in state on Monday from 10 a.m. until services celebrating his life beginning at 11 a.m. at Holy Ghost Lutheran Church. Rev. Lee Cullen, Pastor of the church, will officiate. A private interment will follow at Roselawn Memorial Park.

Gene Palmer Au, age 82, of Monroe, went home to be with the Lord, surrounded by his loving family on Wednesday, March 11, 2020, at Wellspring Lutheran Services. Born November 19, 1937, he was the son of the late Hilda Geiman Au Betker... View Obituary & Service Information

The family of Gene Palmer Au created this Life Tributes page to make it easy to share your memories.

Send flowers to the Au family.