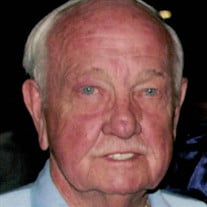 Garrett Gilbert “Gil” Bray. 83 years, of Monroe, Michigan, went home to be with the Lord on Saturday, April 13, 2019 at Promedica Monroe Regional Hospital. Born June 11, 1935 in Harlan, Kentucky, Gil was the son of the late Rev. Clarence Edward and Gladys (VanBebber) Bray. He attended school in Harlan and moved to Monroe in 1950. On May 9, 1955 Gil married his beloved wife, the former Ondra L. Cobb in Monroe. Sadly, she preceded him in death on October 23, 2014, after 59 years of marriage. Upon arrival in Monroe, Gil began working as a meat cutter for Bazeley’s Market where he worked for several years. He then went to work for Ford Motor Company in Monroe from which he retired as a production supervisor in 1991 after 38 years of service. Gil was a 32nd Degree Mason and a member and past Worshipful Master of Monroe Lodge #27 F&AM, he was also a member of the Scottish Rite. He was a member and past Exalted Ruler of the Monroe Elks Club, a member of the Moose Lodge and the Eagles Lodge both in Monroe. He bowled on several leagues in Monroe and enjoyed fishing where he won many Walleye fishing tournaments. He also enjoyed playing golf, where he consistently outmatched his brother Mike. Most of all Gil enjoyed time spent with family. He is survived by two loving children; Daniel L. (Carolyn) Bray of Phoenix, AZ, and Melanie B. Gerken of LaGrange, OH, six cherished grandchildren; Stephanie (Kiel) Greenfield, Savannah (Jeffrey) Strehlow, Steven Bray, Lilianna Bray, Garrett Gerken, and James Gerken, a brother; Michael (Myna) Bray of Nashville, TN and two sisters-in-law; Wilma Bray and Ruby Cleo Cobb. In addition to his beloved wife and parents, Gil was preceded in death by two grandchildren; Robert and Elizabeth Bray, five brothers; Lonnie, Newman, Franklin, Seymour and Ronald, and a sister Kathryn Hatmaker. In keeping with Gil’s wishes, there will be no visitation or funeral services and cremation will be held. He will be interred next to his wife at Roselawn Memorial Park. Memorial contributions are suggested to Shriners Hospitals for Children or St. Jude Children’s Hospital.

The family of Garrett Gilbert Bray created this Life Tributes page to make it easy to share your memories.

Send flowers to the Bray family.