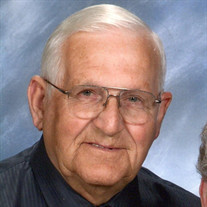 Frederick S. “Fritz” Kominek, age 91 of Monroe, formerly of Maybee, was called to his heavenly home to be with his loving wife at 1:15 a.m. Sunday, March 7, 2021. Born July 22, 1929 in Ash Township, Michigan, he was the son of the late Joseph and Elizabeth (Grabtz) Kominek. Fritz attended Monroe Public Schools. He married his beloved wife, Joyce A. Warfield, on October 11, 1952 at St. Paul’s Episcopal Church, Monroe. Sadly, after sixty-eight years of marriage, she preceded him in death on December 25, 2020. In the early 60’s Fritz worked for Banas and Worbel’s in Maybee, Michigan, and in 1966 he began working for Ford Motor Company at their Saline Plant where he worked as a Press Operator until his retirement in 1991. Fritz was a longtime member of Prince of Peace Lutheran Church in Ida. He was also a member of Dundee Seniors, Ash Township Seniors, Travel Trailers of the Midwest, and participated in senior bowling at Monroe Sports Center. Fritz and his wife loved going camping in their travel trailer throughout Michigan; they also spent seventeen winters in Leesburg, Florida. While they were there, they enjoyed traveling to Lakeland to watch the Detroit Tiger’s spring training. He enjoyed playing cards, fishing, working word search puzzles, taking bus trips, going Western Square Dancing with his wife, working in his woodshed, gardening, and, most of all, cherished spending time with his family, especially his grandchildren and great-grandchildren. To cherish his memory, Fritz leaves six children: Terri (Larry) Gramlich of Maybee, Fred (Kathie) Kominek of Maybee, Sheryl (John) Franzen of Maybee, Rod Kominek of Dundee, Jennifer (Gary) Poupard of Monroe, and Stephanie (Andy) Gabriel of Dundee; eleven grandchildren: Lisa, Matt, Marc, Michael, Rachel, Nicole, Jessica, Donald, Melissa, Liz, and Megan; and twenty-one great-grandchildren. In addition to his parents and wife, he was preceded in death by one sister, Anna Fojtik and six brothers: Frank, Joe, Chuck, John, Jerry, and George. Visitation will be held from 3 p.m. until 6 p.m. on Thursday, March 11, 2021, at Bacarella Funeral Home, 1201 S. Telegraph Road, Monroe, MI 48161. He will lie in state at 10 a.m. Friday, March 12, 2021, at Prince of Peace Lutheran Church, Ida, where services celebrating his life will begin at 11 a.m. Rev. Ted Kerr, Pastor of the church, will officiate. Interment will follow at Rath Cemetery, Raisinville Township. Memorial contributions in Fritz’s memory are suggested to Prince of Peace Lutheran Church. Online condolences and special memories may be shared with the family by visiting the obituary page at www.bacarellafuneralhome.com.

The family of Frederick S. "Fritz" Kominek created this Life Tributes page to make it easy to share your memories.

Send flowers to the Kominek family.